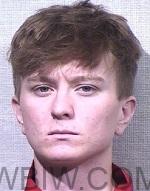 SEYMOUR – A Seymour man was arrested after being accused of repeatedly raping a girl when they were both of juvenile age.

According to Seymour Police Department reports, officers received a preliminary report on the abuse from the Indiana Department of Child Services.

Investigators said that the two were both juveniles when the incidents began and they continued for six to seven years. The sexual actions did not stop until the man became the age of 19.

During a police interview, Minton allegedly admitted to performing the sexual assaults.