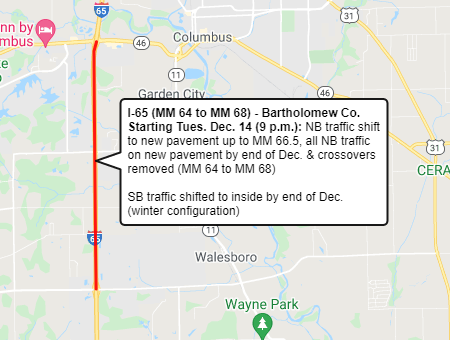 BARTHOLOMEW CO. — Indiana Department of Transportation contractor Force Construction plans to shift traffic early this week in the I-65 construction zone south of Columbus as the added travel lanes project moves into its winter configuration.

Starting around 9 p.m. Tuesday night (Dec. 14), alternating lane closures are planned for northbound lanes beginning just south of S.R. 58. Crews will move the existing right lane closure on I-65 NB to the left lane. Once the closure has been relocated, northbound traffic will no longer use the south crossover located near MM 64, but instead, use the newly constructed lanes up to MM 66.5 on the north end of the work zone.

Also at that time, southbound traffic will shift to the inside, where northbound traffic was previously. This will give motorists a wider outside shoulder and allow crews to prepare for the next phase of construction.

Major construction will resume next spring in southbound lanes between S.R. 58 and S.R. 46, as well as asphalt resurfacing on I-65 NB and SB from the Driftwood River Bridge to U.S. 31 at Taylorsville, and a deck overly on the I-65 bridge over S.R. 46.

The $65 million added travel lanes project is expected to be complete next fall, with some additional work expected through 2023.