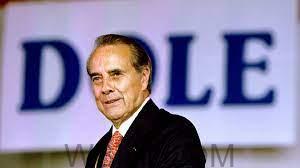 Gov. Holcomb also asks businesses and residents to lower their flags to half-staff.

Bob Dole, the longtime lawmaker who overcame life-threatening injuries during World War II to become a shepherd of the Republican Party, died in his sleep Sunday at the age of 98. In February, Dole revealed that he had been diagnosed with stage 4 lung cancer.

Dole’s death was confirmed by the Elizabeth Dole Foundation in a statement Sunday.

“It is with heavy hearts we announce that Senator Robert Joseph Dole died early this morning in his sleep,” the foundation said. “At his death, at age 98, he had served the United States of America faithfully for 79 years.”

His family also released a statement about Dole’s death Sunday, saying that they have lost their rock, adding that they shared Dole with Americans “from every walk of life” over the decades.

“Bob Dole never forgot where he came from. He embodied the integrity, humor, compassion, and unbounded work ethic of the wide-open plains of his youth,” the statement said. “He was a powerful voice for pragmatic conservatism, and it was that unique Kansan combination of attributes and values that made him such a giant of the Senate.”