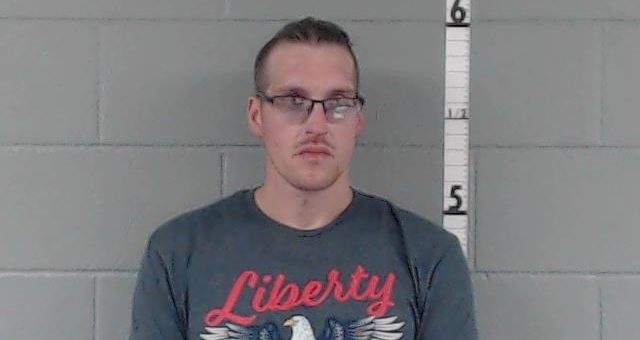 Around 1:20 Tuesday afternoon, the Washington County Sheriff’s Department requested assistance at a Little York address after receiving a 911 call from a distraught female caller. The caller advised she was in a truck possibly stolen out of Kentucky; however, dispatchers said she was speaking quietly and did not provide many details before the call ended.

When the trooper arrived at the residence, he observed a man sitting in a running red Ford Ranger truck with a woman standing next to the passenger door. When the trooper asked the female what was going on, the truck sped off through the yard and struck a state road sign before continuing north on State Road 39.

The trooper pursued the vehicle and observed that the right front tire had gone flat after the truck struck the road sign. The driver continued to flee, driving on the rim of the right wheel, and turning off onto county roads. As the Ranger approached the intersection of Mt. Eden Road and SR39, he was met by several ISP troopers who had set up stop stick tire deflation devices. The driver 36-year-old Thomas H. Spencer, of Boston, Kentucky was stopped before hitting the stop sticks and was taken into custody without incident.

As the investigation continued, officers located marijuana, pills, paraphernalia, and syringes in the truck.

Thomas Spencer was transported to the Washington County Jail without further incident and is charged with the following offenses: resisting law enforcement with a vehicle, possession of a legend drug, unlawful possession of a syringe, reckless driving, driving while driver’s license suspended, possession of marijuana and drug paraphernalia.