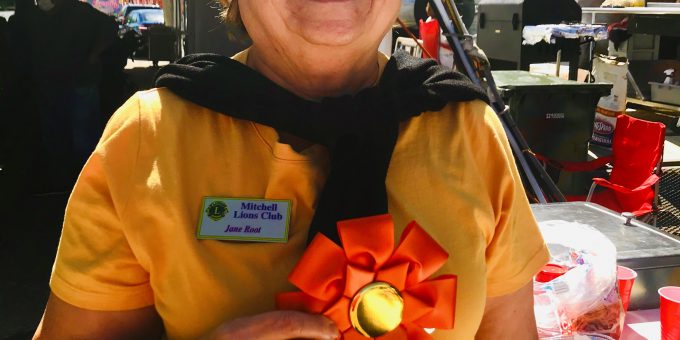 Her recipe was her mother-in-law’s who passed away this year.

“My recipe is sentimental to the family,” said Root. “This is also my sister in laws birthday, so I did it in memory of my mother-in-law and also Happy Birthday to my sister-in-law Martha Fields,” said Root. “This is the first time I entered into the contest and I was shocked. I was not going to enter this year, but last night about 10:00 p.m. took my pudding out of the oven and brought it up to the Church of God,”

Mix together pulp, sugar, eggs and mix soda with buttermilk, let sit until the buttermilk increases, about 15-20 minutes, then add to mixture in bowl. Melt butter in a 13X9 pan and add to mixture. Sift flour, salt, and baking powder. Add to bowl mixture alternating with one cup of milk. Beat with mixer until smooth. Add vanilla and a dash of cinnamon. Bake at 350 degrees for 55 minutes. Do not overbake.

The persimmon is treasured by Hoosiers along with those devoted to the preservation of native and heirloom plants and regional cuisine nationwide. The small burnt-orange fruit — whose Latin name means “food for the gods” — grows on medium-sized trees that belong to the ebony family. A high tannin content makes persimmons virtually inedible until they are soft enough to drop to the ground, in late autumn.

Though persimmons are indigenous throughout the southeastern U.S., the trees are known to thrive best in the Mississippi Basin and especially the Wabash valley. According to local records, trees there have been measured at over 100 feet tall and two feet in diameter.

Persimmons were an important part of the native American diet since they are rich in phosphorous, potassium, and Vitamin C. The fruit was eaten ripe and preserved for winter use.

The word “persimmon,” in fact, derives from the Algonquin word for “dried fruit.” Persimmons figure prominently in Indian legends, and the fruits were baked into loaves Cherokees offered early European settlers.

Southern Indiana still represents a hub of persimmon activity and advocacy in the U.S. Home to substantial persimmon orchards and a significant distributor of persimmon pulp, the area also boasts a unique harvest ritual – the Persimmon Festival, held every year since 1947 in Mitchell, Indiana.