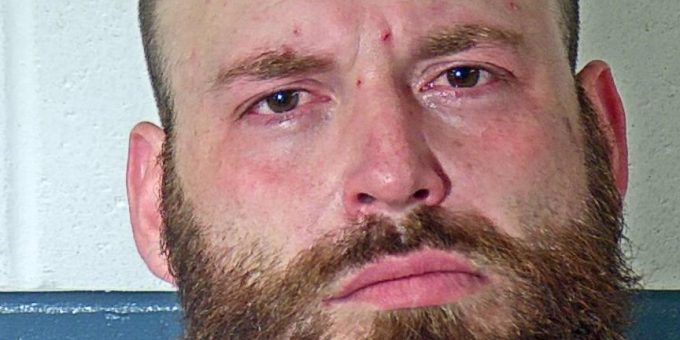 While at this residence, officers obtained information that 38-year-old Justin A. Nelson, of Louisville, Kentucky was on his way to that residence to deliver a large amount of methamphetamine.

Bedford Police arrested the individuals at the residence, while Sgt. Day remained on R Street to watch for Nelson.

A few minutes later, Nelson turned northbound onto R Street from 4th Street, driving a 2003 Ford Escape. As Nelson pulled up in front of the residence, Sgt. Day pulled in front of him and activated his emergency lights. However, Nelson put the car in reverse, backed up a few feet, put it back in drive, then accelerated off-road and around Sgt. Day.

Sgt. Day turned around and initiated a very short vehicle pursuit on Nelson in the Ford Escape.

Less than a block north, R Street ends and an alley then runs east toward Lincoln Avenue. Nelson drove to the end of R Street then began to drive through the backyard of a residence. Sgt. Day traveled down the alley, onto Lincoln Avenue, and observed Nelson driving through a yard in the 100 block of Lincoln Avenue. When Nelson saw Sgt. Day, he turned around causing minor damage to a plastic downspout pipe and the yard, then accelerated traveling westbound around the residence.

Sgt. Day was able to chase and quickly apprehend Nelson on the side of the house.

Bedford Police Officers Robert Looney, Sgt. Kody Emmons, and Capt. Jesse Crane, along with Trp. Chance Humphrey then arrived on the scene. Capt. Crane deployed his canine, Max, who gave a positive alert on the Ford.

Approximately 3 grams of meth and several pills were located in the vehicle. Sgt. Day checked the area that Nelson had ran and discovered a plastic baggie containing approximately 23 more grams of meth.