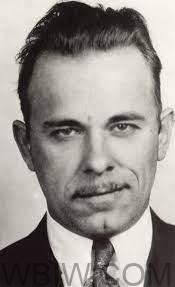 HAMMOND — A northwest Indiana tourism body is shopping around its collection of John Dillinger memorabilia.

The South Shore Convention and Visitors Authority is considering unloading the artifacts, including a photo of the 1930s gangster’s lifeless face, one of his submachine guns, and his original tombstone from Crown Hill Cemetery in Indianapolis.

The items have been sitting in storage since the John Dillinger Museum closed in 2017 at the Crown Point Courthouse.

Board member Tom Dabertin says he has reached out to Chicago museums to gauge interest and assess the potential value of the artifacts.