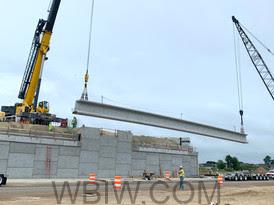 INDIANA – Motorists in Marion and Johnson County will notice a shift in traffic using State Road 37.

Southbound traffic on S.R. 37 is expected to shift across the center median starting Wednesday night between Belmont Avenue and Fairview Road. Both directions of S.R. 37 traffic will be separated by temporary concrete barriers.

The traffic shift will allow work to advance on the new southbound I-69 lanes and bridges through this area.

Drivers should reduce their speed and stay alert as traffic adjusts to the new pattern. The work zone speed limit is 45 mph.

Seek alternate routes and expect 20-minute closures on S.R. 252 today and Wednesday at the I-69 work zone. New bridge beams are scheduled for installation between 11 a.m. and 4 p.m.

Watch for a new curve in the road when Twin Branch Road temporarily reopens later today or Wednesday at S.R. 37 across from Morgan Street. Shortly thereafter, Teeters Road access to S.R. 37 will close permanently to complete the construction of a new overpass.

Fans traveling to Indiana University football games should plan to arrive early to help beat the traffic. Police will be directing Morgan Street and S.R. 39 traffic in Martinsville before kickoff and after games end. Some turn movements on Morgan Street may be closed.

Fans are welcomed to stop in downtown Martinsville and visit local restaurants and shops as traffic thins out.

Crews are getting closer to opening the new Henderson Ford Road bridge and ramp and moving temporary signal access north to Ennis Road. Watch for more news on these traffic changes later this month.

Watch for changing traffic patterns and off-peak lane closures on S.R. 37. Drivers are urged to allow extra space between vehicles and check carefully before changing lanes.

Nighttime I-465 lane closures and 20-minute traffic stoppages continue this week between U.S. 31/East Street and I-65. Demolition crews are removing the Keystone Avenue bridge beams over I-465. See the detour and learn more here.

Similar lane closures and traffic stoppages are expected near the Mooresville Road Bypass bridge over I-465 when it closes for reconstruction. The closure is scheduled to begin Sunday.

Thompson Road is expected to close permanently starting today between Stoops Freightliner and Warman Avenue. The Sunshine Gardens neighborhood can access Harding Street and the future I-69 from the south using Epler Avenue.