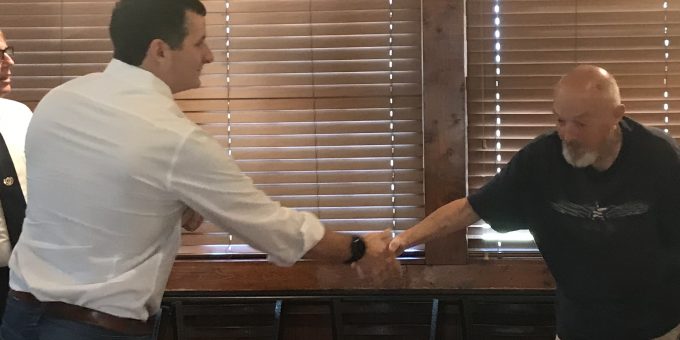 BEDFORD – Indiana 9th District Congressman Trey Hollingsworth was in Bedford Thursday morning to meet with local veterans and government officials to listen to a variety of concerns and issues that affect them.

The meeting took place at the Golden Corral.

Lawrence County Veterans Affairs officer Brad Bough has been advocating for a local VA Center. The closest hospitals are located in Louisville, Kentucky, and Indianapolis, Indiana. Bough says veterans have to drive long distances to access their doctors under the VA system.

General Jonathan George served in the United States Air Force for more than 30 years, including a year on the ground in Afghanistan in 2007 and 2008 as the deputy commanding general of the United States and NATO security training forces attended Thursday morning’s town hall.

“I have a long history with both veterans issues and the Afghanistan crisis. I also stay active in our country’s national security policy issues and I am familiar with the current situations that veterans are facing and as well as our troops over in Afghanistan,” stated General George.

“Southcentral Indiana is a very patriotic community among our veterans. Our veterans aren’t looking for a handout or preferential treatment. In almost all cases they are simply looking for access to resources, either just how to find the correct program to answer their question or by getting to a proper facility that can address their need. The local communities know that they owe our warriors and their families the respect that service members have earned,” George continued.

“There are communities are eager to support our veterans. But sometimes in an area that has seen a lot of resources move away, it becomes more vital for state and federal officials to visit our veterans first hand and often. Just as importantly it is critical that officials keep up to date on the changing circumstances that soldiers, sailors, airmen, marines, and veterans that families face,” George added.

“Everyone thinks that Washington D.C. is a real data-driven place where numbers determine everything. But it is not, it is placed thankfully in some aspects where great stories and narratives animate legislative activity. Brad Bough that has already done is very impactful and animate funding. I am hopeful that will be the case here. Brad has shared challenges of getting to care for someone’s health outcomes. We need to make sure there is significant and adequate funding for the VA not only to maintain the ongoing operation, not only what exists today but to make sure we are improving the service, and delivery of care in more places with cutting edge healthcare,” said Congressman Hollingsworth.

In attendance was Lawrence County resident Stefanie Lambrecht who just recently lost her husband, Donnie in July. She talked about some of the areas of care that her husband Donnie was not able to receive within the VA Healthcare system due to not having physicians available.

“Sometimes wound care is good, he had to have eight different foot surgeries with some bone being removed and he could not get some of the services needed at the VA,” said Lambrecht.

“This is about getting the best and brightest into the organizations that serve our best is our veterans. The reality that exists in a wide variety of healthcare settings, which the number one issue is staffing. Probably all the issues I will talk to businesses about is understaffing can’t get enough workers, teachers, construction workers, etc. This is true in the VA the wages are going up in the private sector really fast, but the public sector has to keep up with that to make sure the funding is there. It is hard to look someone in the face and tell them we think you should take a 20 percent pay cut to work in the VA versus working in the private sector,” said Hollingsworth.

Lambrecht’s husband served three years of active duty and 13 in the National Guard. Now Lambrecht is attempting to get his retirement pension. Her husband Donnie passed away at 57 and she only qualifies for 55 percent of her husband’s pension.

“Where is the other 45 percent, spouses serve to,” she asked. “This is just a slap in the face, you think you are taking care of and find out you are not.”

“We need to make sure that promises are made are promises kept, then when we say if you do this you will or your spouse will receive this and we need need to live up to what this is. It is really important to me, especially to those that are putting on a uniform, especially to those making sacrifices and those sacrificing alongside them and we live up to our obligations and take them seriously,” Congressman Hollingsworth responded.

Brad Bough asked about the route of the Mid-States Corridor into the area, and bring the highway towards Bedford. Congressman Trey Hollingsworth responded by stating that he is opposed to the infrastructure bill that was recently put in.

“Only in Washington D.C. can they do that fuzzy math, and get away with it. I will be opposed to both, which does not mean I do not support infrastructure, but I do not support ridiculous overspending on taxpayer’s dollars. I believe we take the most important step of especially inside Indiana and start investing in people. I have been very critical of Governor Eric J. Holcomb on a wide variety of things. Including his handling of COVID, and the impact it had on our kids, socialization, communities, and in my view, most of that mishandling is in his footsteps,” said Hollingsworth.

Hollingsworth also stated he has been very critical of the reluctance to mobilize the tremendous savings the state has which is billions of dollars. Hollingsworth says it’s time for the State of Indiana to either invest in our communities and advance those communities in infrastructure or return the money to the taxpayers.

“It does not impress me you have a lot of money in Indianapolis, that is taxpayers money you have up there. It is time they either give that back or alternatively invest it in things that move them forward such as education. Not to run on continual campaigns of $1 billion, $ 2 billion, and then finally $5 billion and I am not impressed by stashing the money away in the treasury,” said Hollingsworth.

Congressman in his final remarks commented on the situation on Afagnastan. He went on to state how absolutely he is opposed and will push back against what the media is talking about right now.

“I want to state absolutely for the record, no matter how this has ended that in no way diminishes the sacrifices that were made there for twenty years. The fact that the U.S. Homeland has been safe for the last 20 years, the work that our servicemen members did. The families that will never see 2400 service members again, the injuries that were sustained, none of that is diminished by the disaster and debacle that the Biden administration has caused last week,” said Congressman Hollingsworth.

“I am tired of pundits stating, what was it all for? Well, the sacrifice, service, and courage are never, ever are to be minimized,”

General Jonathan George stated following Hollingsworth’s remarks told WBIW that the vast majority of Afgan citizens are very grateful for our two-decade-long presence in their country.

“They see the positive impact that we have given them and they go through great lengths to show thanks and to support our’s and their fight against the evil Taliban,” said General George.

After 20 years Afghanistan is still a terribly poor country with no ability for the average family to stand up against the brutality of the Taliban and other warlords. ” There is little doubt that our help for the people of Afghanistan was beginning to be more costly than 1, 10, 100 or more American lives. Even as wonderful as Americans are we can not fix every problem. So leaving Afghanistan isn’t; the real problem. IT is how and when to leave that appears to be grossly misjudged. We owed it to ourselves, our international partners, and to the Afgan citizens to put in place a much, more controlled departure than the horrible, brutal departure and empty retreat we have seen over the past ten days, ” General George concluded.

The meeting lasted about an hour. Lawrence County Veterans Affairs officer Brad Bough will continue to have town hall meetings and allow local veterans to have their voices heard by those who are in Washington D.C.