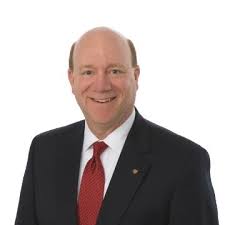 The awards ceremony took place on Aug. 16 in a private ceremony at the IBA Convention in French Lick. This award, the Association’s highest honor, celebrates exceptional leaders who have positively impacted Indiana banks and the communities they serve.

At the honors ceremony, presentations were made by dignitaries including U.S. Sen. Mike Braun; Director Thomas C. Fite, Indiana Department of Financial Institutions; IBA Chairman Michael S. Zahn; and Amber R. Van Til, IBA president and CEO. Additionally, each honoree was invited to make comments, and each was presented with an ebony keepsake plaque.

The awards ceremony culminated with the showing of a traveling version of the IBA Wall of Excellence. A permanent Wall of Excellence is on display at the IBA offices in Indianapolis, with crystalline plaques representing all of the Leaders in Banking Excellence designated since 2018, the year the awards were created. Ewing biography:

Clay W. Ewing retired from German American Bank in April 2021 as its vice-chairman. He formerly served as president and chief banking officer of German American Bank, Jasper, and German American Bancorp Inc. since 1999. Ewing began his banking career in 1978 and has been with German American since 1994. He has served in leadership positions with numerous civic and not-for-profit organizations including the Bank Administration Institute, Inaugural Class of Leadership Perry County, Economic Development Coalition of Southwest Indiana, Perry County Community Foundation, Perry County Development Corp., Perry County United Way and Tell City Jaycees. As 2018 chairman of the Indiana Bankers Association, Ewing successfully initiated efforts to establish a collegiate banking major in Indiana and to create an IBA-led statewide banking internship program. He is a Sagamore of the Wabash, a member of the IBA 40 Year Club, and a graduate of Lockyear College and the School for Bank Administration at the University of Wisconsin.