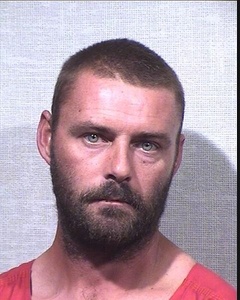 SEYMOUR – On Saturday, August 21st, at approximately 7:21 p.m., the Seymour Police Department responded to the 1300 block of West 2nd Street in Seymour, in reference to a gunshot to the windshield of a vehicle.

When officers arrived at the scene, contact was made with the vehicle’s owner. The vehicle owner believed the incident occurred around 4:00 a.m. the previous morning, as there had been a lot of noise and car alarms were going off at the time.

During the investigation process, officers came into contact with 34-year-old Tyson Marshall, of Seymour.

During contact with Marshall, a Taurus .380 caliber handgun was seized. A Jackson Superior Court 1 search warrant was obtained by Seymour Police Department to search Marshall’s apartment.

Investigators with the Seymour Police Department responded to the scene and conducted an interview with Marshall. Marshall was not forthcoming with any information.

Investigators also processed the vehicle that was shot and recovered evidence from it.

Marshall was arrested on charges of possession of a handgun without a permit while having a previous felony conviction and possession of marijuana.

Marshall also had an outstanding arrest warrant out of Shelby County Indiana.

Marshall was taken to the Jackson County Jail and remanded into the custody of the jail staff.

Investigators later learned that the handgun Marshall had in his possession may possibly be stolen out of Bartholomew County.

Investigators will conduct follow up to determine if the handgun located on Marshall was stolen. The investigation is continuing.