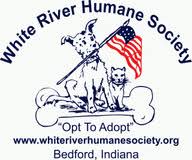 The expenses for the non-profit organization are expected to be around $450,000 by the end of this year, with income estimated at $322,000 which will cause the organization to operate in a deficit.

The contributions of the City of Bedford, Lawrence County, Town of Oolitic, and the City of Mitchell account for only 27 percent of the income of the organization.

Fundraising efforts were affected by COVID-19, however, thanks to memorial contributions to the organization those donations have helped fill some of the gaps in revenue so far.

Using the consumer price index as a model in the number of contributions the City of Bedford should be giving amounts to approximately $34,173.

“It would behoove the City of Bedford to think about if there were no White River Humane Society, with animals running loose in Lawrence County,” said Hendricks.

WRHS is staffed by 4 full-time employees, a few part-time employees with volunteers on occasion to help with the operations of the facility. The cost of the care of these animals is very expensive with some of the cats being in the facility since March of this year.

The City of Bedford will conduct a special meeting on August 30, 2021, to discuss funding for the White River Humane Society, Men’s Warming Shelter, and IU Health Foundation grant request.