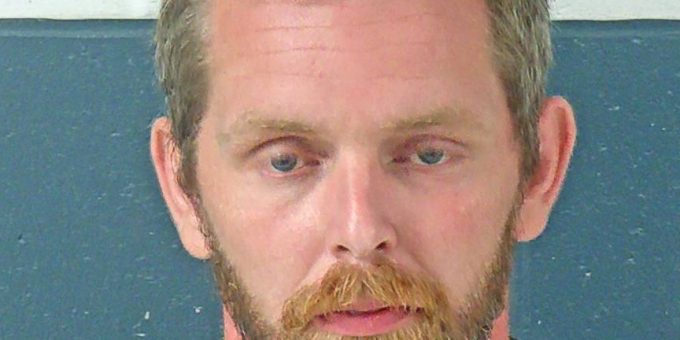 SPRINGVILLE – A Springville man was arrested Wednesday after an Indiana State Police trooper who was parked under a shade tree completing paperwork noticed a vehicle pull into the parking lot.

According to ISP Trooper Greg Day, he was parked in the parking lot of the Popcorn Christian Church, when he noticed a blue, 2002 GMC Envoy driving at a high rate of speed off of Popcorn Road and then pull into the church parking lot. As the GMC rounded around the building it came to an abrupt stop.

Sgt. Day knew the driver, 34-year-old William Cory Thompson, of Springville. Thompson looked at Sgt. Day and appeared to be trying to figure out what to do.

Thompson got out of the GMC and got into the back seat.

Sgt. Day approached the vehicle and asked if Thompson needed assistance. Thompson told Sgt. Day he should not be driving. Thompson was a habitual traffic violator.

Police found Thompson with more than 7 grams of meth in several individual packages. In the GMC police found another baggie of meth and a glass smoking pipe.

Sgt. Day was assisted at the scene and with the investigation by Troopers Chance Humphrey and Caleb Garvin.

Lt. Paul Bucher, Commander of the Bloomington Post commented on the alertness of Sgt. Day, “The public should know that even when doing something as routine as a lunch break or paperwork, ISP Troopers are still observant of criminal activity that affects our community.”