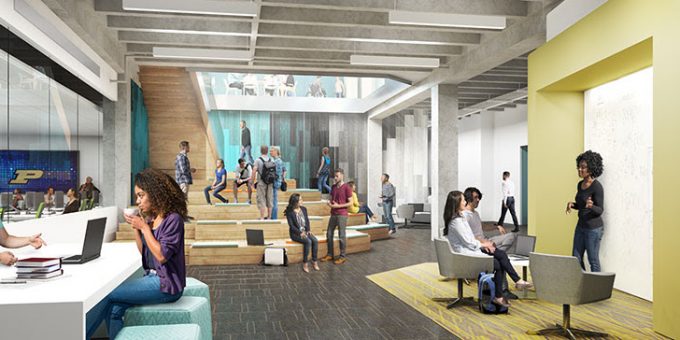 Schleman Hall will become the new and expanded home for Purdue’s rapidly growing Data Science program – with 101,000 gross square feet of teaching labs, group workspaces, study space, and offices – close to the College of Science’s departments of Computer Science, Mathematics, and Statistics, and building on sustained university investment that has supported unprecedented growth in these programs.

Following the renovation of 45,000 gross square feet across three floors, Stewart Center will become the new, principal destination for student services, including admissions, enrollment management, financial aid, bursar, and registrar functions that interact directly with students. As part of the project, the university will also expand the testing center in Stewart Center and refresh student organization spaces in both Stewart Center and the Purdue Memorial Union.

“The relocation of student services from Schleman Hall to modernized space in Stewart Center will improve the current and prospective student experience by co-locating services in an ideal location and ensuring that students know where to go for services and assistance from their very first visit to campus,” said Michael B. Cline, senior vice president of Administrative Operations. “This arrangement also creates more flexible space that can be used after hours for informal student collaboration.”

Other current tenants in Schleman Hall will move to spaces in Young Hall, 2550 Northwestern Avenue, and Hovde Hall of Administration.

“Creating a true student services corridor will make it more convenient for our students to access a number of services and resources in one location, rather than going from building to building,” said Jay Akridge, provost and executive vice president for academic affairs and diversity. “Stewart Center, with its myriad resources and central location, is the perfect space for such a corridor. Newer space, outfitted for our post-COVID work world, will also benefit our staff. The new home for the LGBTQ center will allow an expansion of programming in a contemporary facility. While the set of moves is complex, new homes for these important units will open up many new opportunities for better serving our Purdue community.”

Pending review and approval by the Indiana Commission for Higher Education and the State Budget Committee, renovations for relocated tenants, including those in Stewart Center, will begin in April and be complete in September 2022. Schleman Hall will be fully vacated with the new locations occupied in December 2022. Renovations will start in Schleman Hall in February 2023, with an expanded data science presence set for August 2024.

The estimated total cost of the project is $52.8 million, with $47.8 million coming from operating funds reserves and $5 million from gift funds.

A strategic institutional priority, Purdue’s enrollments across the data and computational sciences continue to grow significantly, illustrating the university’s commitment to preparing its students for this emerging segment of the economy, from careers in technical research and development through to the key data literacy skills critical to future decision-makers in all fields. Purdue’s Data Science Major – which focuses on how best to make rigorous sense of data through a blend of modern mathematics, statistics, and computing – opens pathways to careers in virtually every area of society, from health care, security, and sustainability to education, business, and economics. More broadly, The Data Mine, launched by the College of Science with statistics professor Mark Daniel Ward in 2018, offers experiential learning in data science to 600 Purdue undergraduate and graduate students from all majors who work with firms and organizations on real-world data science problems, with plans to reach more than 1,000 students in the year ahead.

In December 2019, trustees approved the construction of a new facility dedicated to Data Science along University Street just north of the Purdue Armory near the university’s STEM teaching building, Chaney-Hale Hall of Science. The increased use of hybrid and remote work arrangements on campus is a catalyst for the university to renovate Schleman Hall rather than build a new facility – making more efficient use of existing space and reducing long-term operating costs.

“We are thrilled to expand our Data Science program into such an iconic building in the heart of campus, right next to the recently opened Cheney-Hale Hall of Science,” said Patrick J. Wolfe, dean of the College of Science. “This dedicated facility speaks volumes to our continued commitment to advance the forefront of data science research and education, for the benefit of all Purdue students.”

The renovations to Schleman Hall and Stewart Center are consistent with the 2018 Giant Leaps Campus Master Plan goals of investing in teaching, research, and collaborative spaces and prioritizing strategic renovations.

Trustees also approved repair and rehabilitation projects for two buildings on the West Lafayette campus. The replacement of two transformers and two electrical distribution systems in the Biochemistry Building will be funded by operating funds. The replacement of the steam heating system, installation of three new air handling units, and replacement of 100 exhaust fans with a new central manifold ventilation system in the Whistler Hall of Agricultural Research will be funded by repair and rehabilitation appropriations and operating funds.