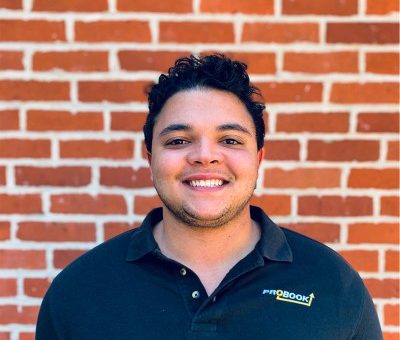 ProBook provides an all-in-one platform to streamline team management and athlete development and is led by founder and CEO Andre Harakas. The new capital will help ProBook further develop the app’s features and expand its customer base.

Pat East, Executive Director of the Mill, said, “I first became aware of ProBook from Jason Whitney at IU Ventures, who said I had to check out this great startup from a student at Indiana Wesleyan. Then in the spring of 2021, an hour after taking his last exam as a college senior, Andre pitched ProBook at our inaugural Crossroads Collegiate pitch competition and took home top honors, beating out other startups from across the state. We saw a great opportunity there for Flywheel Fund to get in early with an up-and-coming sports tech startup. ProBook provides a needed solution and has a smart strategy for going to market.”

Harakas, a first-generation college graduate of Indiana Wesleyan University, started developing ProBook Sports as a freshman football player. He noticed that athletic directors and coaches were forced to cobble together multiple apps to meet their needs and designed ProBook to consolidate features into one app. Brian Hatton, Venture Partner for Flywheel Fund, commented, “ProBook Sports provides an end-to-end platform for coaches to engage with their team members in aspects ranging from video and analytics to nutrition and calendar management. In a market where the dominant player is focused on providing video to very large, professional organizations, ProBook is poised to fill a gap with the thousands of other teams that can utilize their management software.”

Earlier this year, Harakas won a spot in the competitive gBETA program from nationally ranked accelerator gener8tor. He was also named Entrepreneur of the Year at Indiana Wesleyan.

“We are excited to have the Flywheel Fund invest into the #probookfamily,” Harakas said in a statement. “The funds are going to ramp up our already growing customer pipeline. Thank you, Brian Hatton, Pat East, and Jason Whitney for hosting the pitch! Flywheel did not just invest in us, but provided two amazing mentors from the organized sports space. We look forward to learning from Regan and Anthony! #bethepro.”

ProBook is closing a $350,000 round with participation from Skypoint Ventures, Flywheel Fund, and other notable investors, including Jim Zarvos. The organized sports team vertical market in the US and Canada is estimated at $1.78 billion. ProBook has already secured brand ambassadors from celebrity figures working in that space, including Stevie Johnson Jr, a former NFL receiver turned head coach, and Dwane Joshua, an ABA semi-pro head basketball coach. The ProBook platform can be used for any team sport.