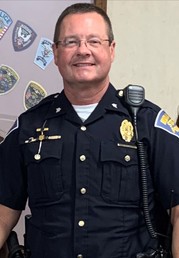 PENDELTON – Sergeant Robert Cross recently retired after serving 34 years with the Indiana State Police. The Pendleton Post hosted a reception to celebrate his service to the citizens of Indiana. He was presented with a wooden plaque and a ceremonial flag to honor him on his last day in uniform.

During his career, Sgt. Cross served as a Field Training Officer and a Crash Reconstructionist.

Sgt. Cross plans to spend time with his wife and three adult children as he transitions from public servant to retired Indiana State Trooper. The Indiana State Police Pendleton Post wants to thank Sgt. Cross for his 34 years of service.