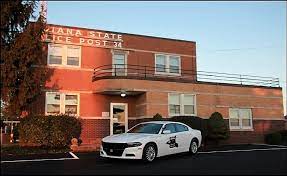 A public dedication ceremony for the historical marker commemorating the Jasper Post will be held on Wednesday, July 28th at 11 a.m.

The Jasper ISP Post built in 1937, is the last remaining Works Progress Administration (WPA) Post still being utilized by the Indiana State Police.  The WPA was a New Deal agency that employed millions of jobseekers to carry out public works projects, including the construction of public buildings and roads to help the United States get out of the Great Depression.

In early 1938, the Indiana State Police opened Post 8 in Jasper. This state police post would house 20 troopers who would serve 14 of Indiana’s 92 counties. It was a state-of-the-art facility with a firing range, barracks, laboratory, and a radio tower.

The radio tower at the Jasper Post was one of five throughout the state – the others being Columbia City, Indianapolis, Gary, and Seymour. This new radio tower would bring in a new era of policing in Indiana – transmission of information to police officers was brand new with the creation of these radio stations.

State historical markers commemorate significant individuals, organizations, places, and events in Indiana history. These markers help communities throughout the state promote, preserve, and present their history for the education and enjoyment of residents and tourists of all ages. For over 100 years, the Indiana Historical Bureau has been marking Indiana history. Since 1946, the marker format has been the large roadside marker, which has the familiar dark blue background with gold lettering and the outline of the state of Indiana at the top. More than 670 of these markers have been installed over the years.