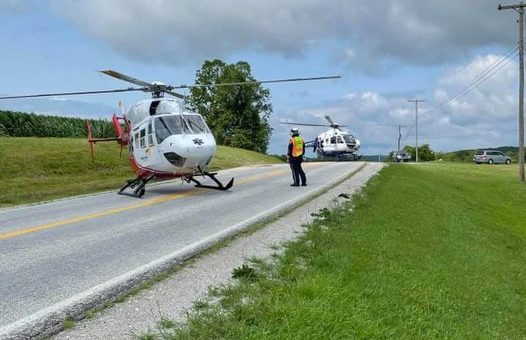 WASHINGTON CO. – Troopers from Indiana State Police Sellersburg Post are investigating an injury crash involving a passenger car and a pick-up truck. Both drivers suffered serious injuries and were transported to University Hospital.

At approximately 11:12 a.m. Saturday, Troopers Kevin Bowling and Brett Walters, along with officers from the Washington County Sheriff’s Department and the Posey Township Fire Department, responded to a crash on US 150 just west of Kay’s Chapel Road, located between Fredericksburg and Hardinsburg, Indiana.

When officers and first responders arrived, they found a beige 2014 Buick LaCrosse had collided head-on with a white 2013 Chevrolet Silverado.

Both vehicles were stationary in the westbound lane of the highway.

Air ambulances were called for both drivers, who were the sole occupants of their cars. The driver of the Buick had to be extricated from the vehicle before being flown out.

Troopers on-scene called an ISP Crash Reconstruction Team to assist in the investigation.

Both drivers were taken to University Hospital in Louisville. As of this news release, Linda Flock is listed in critical condition, and Nicole Cochran is listed in serious condition.

Family members of both drivers have been contacted. This crash remains under investigation