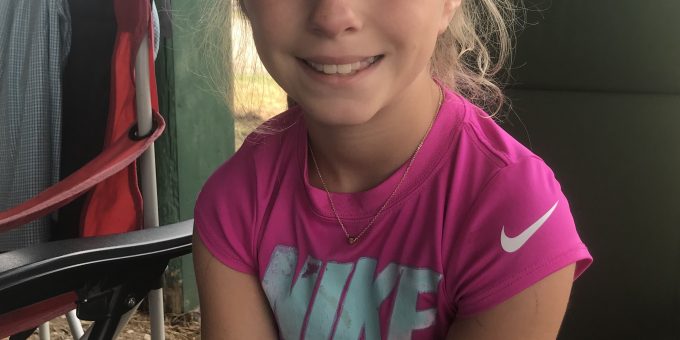 LAWRENCE CO. – Wesleigh Inman was riding her horse Monday night during her horse show at the Lawrence County 4 H Fair. According to her mother, several things could have caused her to fall. Her mother, Jennifer, suspects that Wesleigh may have pulled too far back on the reins to cause the fall.

Weleigh was showing in the category of Pole Bending, a timed event that features a horse and one mounted rider, running a weaving or serpentine path around six poles arranged in a line. During this event, Inman and her horse fell. From a distance, it appeared that the horse fell on the young girl. However, after viewing video footage, as the horse fell it rolled on its side and nearly missing the young 4-H member.

Emergency personnel from Marion Township Volunteer Fire Department and Seals Ambulance crew arrived and transported her to IU Health Hospital in Bedford. She was then airlifted to Riley’s Children’s Hospital in Indianapolis.

According to Wesleigh’s mother, she suffered fractures to her vertebrae and pelvis but under the situation, it could have been a whole lot worse.

Wesleigh said it was a scary experience for her but the staff at Riley Children’s Hospital treated her well.

The St. Vincent 4th grader was present as her prized pig “Marshmellow” was sold during the auction on Saturday.

“The community has treated us well and the 4-Hers are really like family to us,” said Justin, Wesleigh’s father.

“We just want to thank everyone for their support,” said Wesleigh’s mother.

Wesleigh’s brother walked “Marshmellow” on the auction floor Saturday. Wesleigh could not hold back the tears as her pig was sold.

She continues to recover and is ready for next year’s 4-H Fair.