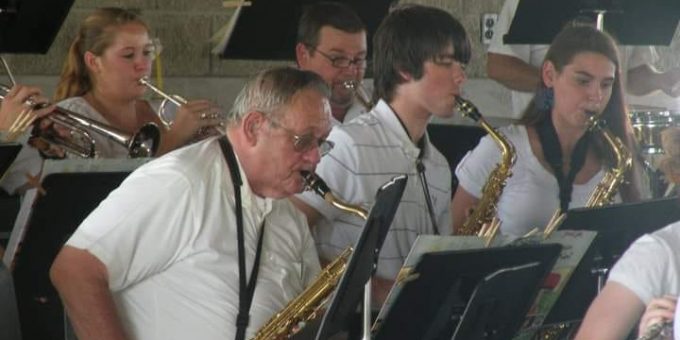 A celebration of the life of Alan “Al” Lee Walker, formerly of Bedford, will be Saturday, July 17th at 2 p.m. at the Bedford First Presbyterian Church.

Music will feature the Nostalgia Band’s recordings of Martinsville – Live. Al played tenor sax in the Nostalgia Band. He also played in both the Bedford and the Bloomington Community Bands because the music was the center of his life’s interests.

He died Saturday, May 23, 2020, in Spartanburg, SC where he had been living for several years.

He was married to Donnera Phillips who preceded him in death on November 9, 2017. Survivors include two daughters, Mrs. Chester (Gloria) Kasnowski of Reston, VA and Mrs. David (Elizabeth) Blumenfeld of Landrum, SC, with two granddaughters, Lura and Leiha Blumenfeld, one grandson, Jacob Blumenfeld. Other survivors include nephews, Ken and Jim Gates, Gary, Terry, and Richard Phillips, and two nieces, (who both lovingly claimed to be his favorite niece), Donna Ann Gunn and Linda Kay Tobler. Under his expansive wings of love, he included as his honorary daughters, Linda (Black) Whitted and Susan Lee, both of Lawrence/Monroe County, Jasmin Becker Langer of Germany, Bernadette Thompson Beattie and Amanda Moon Bloomfield, both of Northern Ireland.

Many remember him as one of the “Voices of the Stonecutters” in the Quarry on WBIW where he was also an ad salesman spanning the 1960s to mid-1970s. He switched to WUME for Paoli sports and advertising for several years. He loved the (current) West Baden Springs Hotel and jumped at the opportunity to serve as a college recruiter and teacher when it operated as Northwood Institute. For a period of time, he served as Bedford Chamber of Commerce director, then settled into running the Owls Nest and co-owning the Jug Store until opting for total retirement.

For a number of years, he was an active boater and member of the Power Squadron. He also was a United States Air Force Reservist and the Army National Guard at Bedford’s Armory.

He loved to travel, but always considered Colorado as Heaven-on-Earth. He loved history, visiting Civil War battlefields with friends, creating motorcycle trips to abandoned railroad trails and ghost towns in Colorado. One of his favorite motorcycle trips was “Around the World in Indiana” where he led people to Hoosier towns with foreign country’s names.

He and Donnera shared that love for motorcycling, exploring, seeing all 50 state capitols, visiting Northern Ireland, the UK, and Germany. Most likely, he’s already mapping a tour of heaven.

Graveside services will be Saturday, July 17 th at 10:30 a.m. at the Bristow Cemetery in Bristow, Perry County, IN.