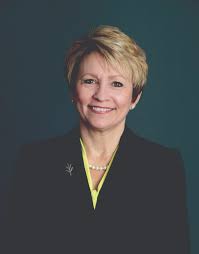 Dr. Ellspermann currently serves as president of Ivy Tech Community College, Indiana’s largest post-secondary institution and the nation’s largest singly-accredited statewide post-secondary institution. She previously served as Indiana’s Lieutenant Governor and as an Indiana State Representative. Her earlier career includes being a founding director of the University of Southern Indiana’s Center for Applied Research and Economic Development, and an owner of Ellspermann and Associates, Inc., a business focused on creative problem solving and strategic planning, and holding industrial engineering positions at GM, Michelin and Frito-Lay. Dr. Ellspermann holds a M.S. and PhD in Industrial Engineering from University of Louisville and a BSIE from Purdue University. She is a resident of Dubois County, Indiana, which is the base of operations for German American.

“Sue will bring both a depth of experience and a fresh perspective on several levels to our Board,” stated Mark A. Schroeder, German American’s Chairman & CEO. “Ivy Tech’s presence throughout the State, and in particular within the markets in which we do business, allows Sue to have meaningful local knowledge about each of these areas. Additionally, her unique perspective as it relates to the academic, corporate, and governmental environment, will be invaluable to German American as we strive to enhance each of these sectors of our business. Sue has focused much of her career on serving the broader community and the public sector. That experience, as well as her expertise and leadership in economic development and civil service gained during her time as Indiana’s Lieutenant Governor, will most certainly be a significant asset to German American.”

“I am pleased to join the German American Board of Directors,” stated Dr. Ellspermann. “As a native and resident of Dubois County, I have had the fortune to observe, on a first-hand basis, German American’s exceptional level of growth and performance over the past decade. German American’s focus on partnering with local communities, clients, and team members to help all stakeholders of the bank to grow and prosper aligns perfectly with my passion for helping others achieve their next level of success. I’m excited to become part of German American’s efforts to drive the continued growth and prosperity of the Company and the clients and communities they serve in the coming years.”