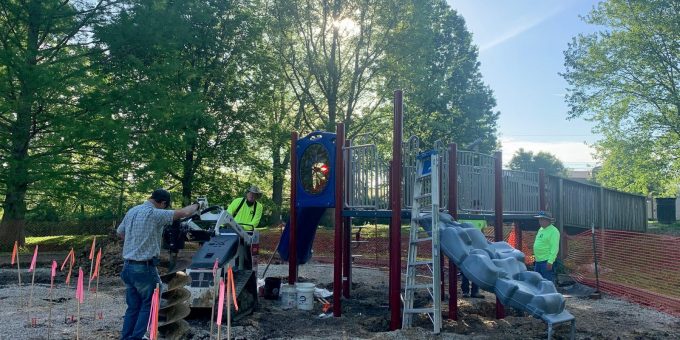 Excavation has begun in preparation for improvements at the bus stop at the intersection of West Graham Drive and South Rockport Road at Country View Apartments, the first of more than 25 bus stops throughout the city to be improved this summer.  Part of Mayor John Hamilton’s Recover Forward initiative, the project will make access improvements to more than 25 bus stops throughout the city, including better sidewalk access and loading zones and benches or shelters.  Completion of improvements to all bus stops is expected by the end of July. During construction, some sidewalks will have intermittent closures with pedestrian detours or walk-arounds in place, and traffic may be reduced to one lane depending on the location of the work.  Maps of the bus stops to be improved are available here, with additional information at the project page.

Recover Forward projects include expanding access to jobs through training/education, housing, transportation options, renewable energy, social services, food, the arts, and the internet. The investment is intended to help Bloomington recover from the pandemic and economic collapse, while advancing racial, economic, and climate justice.

The intersection of East Third Street and South Indiana Avenue is temporarily operating as an all-way stop while improvements are underway.  New sidewalk and ADA ramps on the south side of the intersection have been completed, and construction has now progressed to the north side.  The project to improve the pedestrian features (including crosswalks) and replace the traffic signal at this intersection is expected to be substantially complete by mid-August, with the new signal operational in early July.  More information is available at the project’s website.

Located at West Tenth and North Rogers Streets beside the B-Line Trail, the Trades District Parking Garage is now open and available for parking without fees through the coming weekend.  (Those parking will take a ticket upon entering that can be inserted for free parking upon exiting the facility.) The facility’s elevators have been certified for use by the State, final work is being completed on exterior hardscaping, and accessible parking is being designated with guidance from City Planning and Transportation Department Compliance personnel.  Inspections for the facility’s permanent operating permit will be scheduled next week after final details are completed.

Approved for development by the BRC and City Council to support the city’s newest employment hub and cultural destination, the 350-space garage features commercial/retail space facing the B-Line Trail to complement the Trades District’s burgeoning business activity. Inquiries about leasing commercial space in the Trades garage may be made through the City’s Economic and Sustainable Development department, at 812-349-3418.

Equipped with electric vehicle charging stations and a solar array, the Trades District Garage and the replacement Fourth Street Garage (scheduled to open this August) will be the first in Indiana to achieve Parksmart certification, a sustainability credential.  The facility is equipped with crucial growth-oriented IT facilities to support the District now and into the future via broadband fiber infrastructure and switching.  The garage will also feature artwork funded through the One Percent for the Arts Ordinance.  More information about monthly or annual parking at the Trades District Garage is available online at Monthly Garage Parking Permits and Parking Garage Information | City of Bloomington, Indiana, through the Garage Customer Service Representatives during regular business hours at 812-369-3622, or through the Parking Customer Service Office at 812-349-3436.

Construction has begun on a new section of sidewalk along the eastern side of South Maxwell Street from East Miller Drive to East Short Street.  This project was recommended and funded by the City’s Council Sidewalk Committee initiative to improve pedestrian safety in the area.  Construction will continue through the spring and early summer and is anticipated to be complete by the end of July.  More information is available here.

Installation of new playground equipment at the Reverend Ernest D. Butler Park is expected to be complete this month. The playground will have a new climber/spinner feature, benches, and concrete curbing around the perimeter; and the existing swing set will be repainted.  The project’s timeline was extended by the discovery of substantial limestone bedrock underneath the playground, which required additional excavation to install support posts for the new playground structure.  A reopening event will take place upon the playground’s completion.

Community members are invited to offer ideas for a playground at the Waldron, Hill, and Buskirk Park (Third Street Park) to replace the one that was removed as part of the City’s Hidden River Pathway Project (more information below). Comments, suggestions, and feedback about types and styles of playground equipment may be submitted at https://bloomington.in.gov/parks/parks/third-st-park.  This input, together with that from other regular users of the facility, will inform the process of selecting the new playground equipment, which is scheduled for installation in late 2021.

The Hidden River Pathway Project is progressing with the replacement of the network of culverts that carry the Campus River (formerly the Jordan River) from Dunn Meadow on the Indiana University campus southwest under downtown Bloomington to West 1st Street and South College Avenue, where it reappears as Clear Creek.

Temporarily closed between South Lincoln and South Washington Streets to accommodate the removal of the existing box culvert, East Smith Avenue is scheduled to reopen by the end of June. With the end of the academic year for The Project School, South Washington Street will reopen to thru-traffic at all times Thursday, June 10. During the week of June 14, precast culvert sections will be installed from behind The Rise (at Smith and Washington) to Smith.

Over the next two years, City of Bloomington Utilities (CBU) and its contractor, Milestone Contractors, LLP will be reconstructing 1,829 feet of culverts.  In addition to stormwater improvements, some reconstruction of sanitary sewers and water main infrastructure will be simultaneously completed to support Bloomington’s vibrant downtown.  More information, maps, and updates about the Hidden River Pathway Project are available here.

When encountering these improvement projects or others, motorists are asked to travel slowly, cautiously, and distraction-free through every construction zone for the safety of the workers and others using the road.