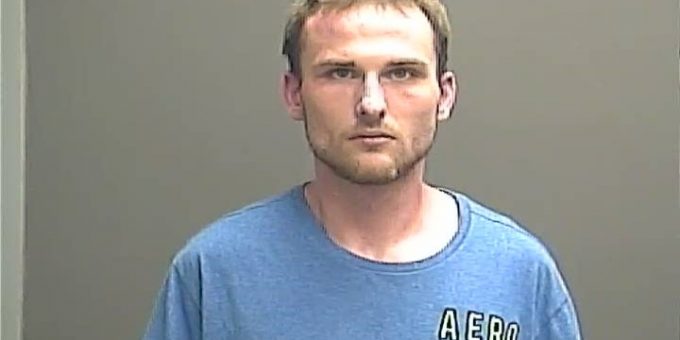 KNOX CO. – Early this morning at approximately 2:13 a.m., an Indiana State Trooper was patrolling on 6th Street near Cullup Street in Vincennes when he stopped the driver of a 2008 Dodge truck for a defective headlight.

The driver was identified as 25-year-old Matthew Patton, of Vincennes.

Patton displayed signs of impairment and failed field sobriety tests. When officers searched Patton’s truck, they found one pill that was later identified as amphetamine, a Schedule II controlled substance.

Patton was transported to Good Samaritan Hospital in Vincennes for a blood test. After arriving at the hospital, Patton’s handcuffs were removed so he could submit to a blood draw. Before the blood draw could be administered, Patton fled the room and ran toward the emergency department.

The trooper caught up with Patton and placed him on the ground where he continued to resist. After a brief struggle, Patton was handcuffed again and transported to the Knox County Jail where he is currently being held on bond on charges of operating a vehicle while intoxicated controlled substance, possession of a controlled substance. attempted escape, resisting law enforcement.