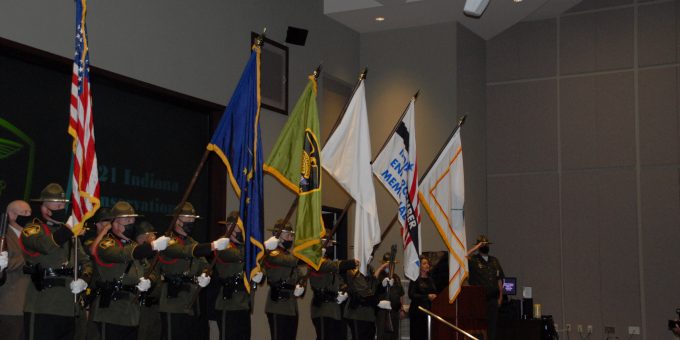 INDIANAPOLIS – A ceremony was held Thursday to remember fallen Indiana Conservation Officers and recognize current officers for their excellence while serving the state of Indiana and its citizens.

The seven members of the DNR Division of Law Enforcement who have died in the line of duty since its inception in 1911 were honored during the ceremony in the auditorium of the Indiana Government Center in Indianapolis.

Those officers, listed with their end of watch date:

After the memorial ceremony, the division recognized individual officers for their outstanding service.

“It is an honor to recognize our heroes of the past and present and highlight the sacrifices our officers make while serving our great citizens of the state of Indiana,” said Col. Steve Hunter, division director.

The Pitzer award is named for Conservation Officer Pitzer, who was killed in the line of duty on Jan. 2, 1961, in Jay County. The Pitzer recipient demonstrates professional ethics, attitude, and service to the public while demonstrating dedication to the principles of the conservation of natural resources and the enforcement of laws affecting the department. The officer must also demonstrate the ability to provide a positive influence, develop camaraderie within the ranks, and gain the confidence and respect of fellow officers.

Sgt. Greg Swanson received the 2020 William J. Nattkemper Brotherhood Award. This award is named for the warden who, along with Peare, lost his life in 1926 on the Wabash River near Tecumseh. Witnesses to the incident, officers L.B. Watson, John Pile, and A.R. Hill, remained at the scene until the bodies of their fallen comrades were recovered. The award recognizes the recipient as having a resemblance of the commitment and inseparable bond of brotherhood displayed by those officers that have become the hallmark of Indiana Conservation Officers.

District 1 Officer Mark Richter was presented with the 2020 Waterfowl Protection Officer of the Year award for his enforcement of waterfowl regulations and his related performance in public education and community interaction.

Officer Jim Schreck of District 8 was honored with a Life Saving Award for his heroic response to a shooting that occurred outside the entrance of O’Bannon Woods State Park.