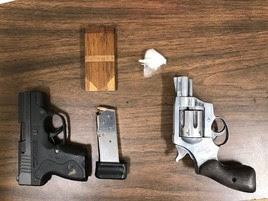 SOUTHERN INDIANA – Two people from southern Indiana were arrested on numerous charges Wednesday morning after the driver led officers from two states and multiple counties on a high-speed pursuit.

Around 3 a.m. Wednesday, Louisville Metro Police advised they were in pursuit of a blue 2019 GMC Sierra, reported as stolen. The vehicle was believed to be occupied by two people and was westbound on I-64 approaching the state line. Kentucky authorities terminated the pursuit as the GMC crossed into Indiana.

The Sierra was equipped with the On-Star security system, and both Kentucky and Indiana authorities were in contact with On-Star during the pursuit. Attempts by On-Star to remotely disable the car were unsuccessful.

After the car crossed into Indiana, an Indiana State trooper observed the vehicle speeding westbound near the 105 mile-marker in Harrison County and attempted to make a traffic stop. The driver did not stop, and the pursuit continued on I-64 through Harrison and Crawford Counties with speeds of more than 100 miles per hour.

The pursuit continued westbound and entered Perry County, where attempts by Perry County deputies to use tire-deflation devices were unsuccessful.

After entering Spencer County, the driver turned south onto US 231 and continued southbound, again avoiding tire-deflation devices set up by Spencer County authorities. As the Sierra approached State Road near Chrisney, Indiana, On-Star was able to shut down the vehicle remotely, and the driver drove into the median.

Troopers located a revolver with the serial number removed and a loaded 9mm semi-automatic pistol during a search of the vehicle. Approximately five grams of methamphetamine and one gram of marijuana were also found.

Both subjects were transported back to the Harrison County Jail.