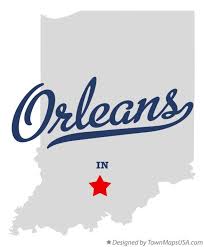 ORLEANS – Due to last Saturday’s rainout, the Orleans “Cruise, Blues and BBQ” car show has been moved to this Saturday, May 1.

The hours will remain the same, from 2 p.m. until 6 p.m. on historic Congress Square in downtown Orleans.

Registration will take place from 1 p.m. until 2 p.m. and awards will be presented at 6 p.m.

“This will be the chamber’s first big event in the last 12 months,” said Robert F. Henderson, Chamber Executive Officer.   We are hoping everyone will come out and join us on the historic town square for this fun family event.

The vehicles that are named “best of” a certain category will be able to compete head-to-head against the winner of the same “best of” category named at the Fall Fun Fest car show in October.

All types of cars, truck, bikes and motorcycles are welcome to compete in the show.

There will be non-food and food vendors set up near the show. Also SpeakEasy Pizza will be open during this time. They will also have live music and the car show will be providing a DJ for entertainment during the show hours.

A portion of the proceeds will benefit the Orleans Chamber of Commerce and its promotion of business and general life in the Orleans community.