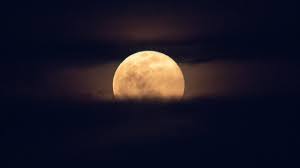 There are two supermoons in 2021, and the next one is tonight.

A supermoon is a full moon that appears larger than a typical full moon due to it being closer to Earth.

Another measure that’s used to determine if a full moon is a supermoon is its physical distance from Earth. The exact distance cutoff varies, but generally, adheres to the idea that a full moon occurring at a distance closer than 224,000 miles (360,000 km) is considered a supermoon.

The eclipse will only be visible in some parts of the world, unfortunately. If you’re located in western North America, however, you’re in luck.

WHY DO SUPERMOONS OCCUR?

It all comes down to the fact that the Moon’s orbit around Earth is not a perfect circle—in fact, it’s an elliptical (oval) shape.

Because of this, the Moon’s distance from Earth changes as it travels around our planet. Additionally, Earth doesn’t sit directly in the middle of this elliptical orbit, so there are points in the Moon’s orbit where it is closest and farthest from Earth. These points are called perigee and apogee, respectively.

The Moon makes one full orbit around Earth in about 29.53 days, which means that it reaches its perigee and apogee points about once a month. When this occurs at the same time as a full moon, it’s called a perigee syzygy—or, more commonly, a supermoon!

Supermoon is not an official astronomical term, it was coined by astrologer Richard Nolle in 1979.

At the time, Nolle defined a supermoon as “a new or full moon which occurs with the Moon at or near (within 90 percent of) its closest approach to Earth in a given orbit.”

Given that a supermoon full moon is closer to Earth than a normal full moon, it does appear larger about 7 percent larger, which is nearly impossible to perceive. This means that the difference between a full moon at perigee and a full moon at apogee can be up to 14 percent which is significant.

If you want to be guaranteed of seeing a huge-looking Moon, it’s easy, simply watch the Moon when it’s rising or setting.

A Moon near the horizon will always look bigger due to a phenomenon called the Moon illusion, which makes our minds exaggerate the size of objects near the skyline.