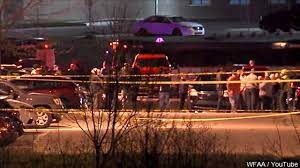 The former employee, of Indianapolis, who shot and killed eight people at a FedEx facility in Indianapolis was interviewed by FBI agents last year, after his mother called police to say that her son might commit “suicide by cop,” the bureau said Friday.

The FBI statement said that Hole “was placed on an immediate detention mental health temporary hold by the Indianapolis Metropolitan Police Department. A shotgun was seized at his residence and never returned.

A year ago, a gun was seized from Hole in an incident involving IMPD, McCartt said. An IMPD police report from March 3, 2020, says the gun was confiscated from Hole during a mental health check at his home. His mug shot provided by police is from that incident.

Investigators continue to search for a motive in the mass shooting at FedEx.

Indianapolis, Deputy Police Chief Craig McCartt said Hole last worked for the company in 2020. He did not know why Hole left the job or if he had ties to the workers in the facility. He added, police have not yet uncovered a motive for the shooting.

We are devastated at the loss of life caused as a result of Brandon’s actions; through the love of his family, we tried to get him the help he needed.  Our sincerest and most heartfelt apologies go out to the victims of this senseless tragedy.  We are so sorry for the pain and hurt being felt by their families and the entire Indianapolis community. The Hole family and its representatives decline all interview requests at this time.”

Chief McCartt said the slayings took place in a matter of minutes, and that there were at least 100 people in the facility at the time. Many were changing shifts or were on their dinner break, he added.

According to police, during the shooting at FedEx Ground-Plainfield Operation Center, Hole was witnessed using two assault rifles in the shooting that left eight people dead and several others injured.

Both rifles were found on Hole after he was discovered deceased in the business from a self-inflicted gunshot wound.

The department of Alcohol, Tobacco and Firearms conducted a trace on these two firearms and learned both were purchased legally by Hole in July and September of 2020.

Investigators searched a home in Indianapolis associated with Hole and seized evidence, including desktop computers and other electronic media. The home is located in a neighborhood of midcentury houses near Interstate 465.

On Saturday, several vigils took place across Indianapolis in memory of the victims.

The killings marked the latest in a string of recent mass shootings across the country and the third mass shooting this year in Indianapolis. Five people, including a pregnant woman, were shot and killed in the city in January, and a man was accused of killing three adults and a child before abducting his daughter during at argument at a home in March. In other states last month, eight people were fatally shot at massage businesses in the Atlanta area, and 10 died in gunfire at a supermarket in Boulder, Colorado.

“This is another heartbreaking day and I’m shaken by the mass shooting at the FedEx Ground facility in Indianapolis. Indiana State Police are working with local responders and we will continue to offer any and all resources needed to assist during this tragedy. In times like this, words like justice and sorrow fall short in response for those senselessly taken. Our thoughts are with the families, friends, coworkers and all those affected by this terrible situation.

“Today, I will order that flags be lower to half-staff from now until sunset on Tuesday, April 20 in remembrance of those we’ve lost.”