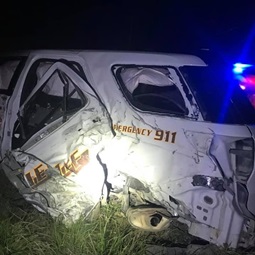 ODON – A Daviess County Sheriff’s deputy escaped serious injury early Friday morning when his police vehicle was hit by another driver who fled the scene.

According to an Indiana State Police report, Deputy Troy Fuhs was taken to a local hospital and was treated and released.

Deputy Fuhs received a report of people in a Ford Explorer acting belligerent and possibly drunk at the Chuckles in Odon early Friday morning.

Deputy Fuhs responded to the complaint and his patrol vehicle was reportedly struck by the vehicle he had been called to check on.

The accident happened on the southside of Odon at the intersection of County Road 1100 North and County Road 900 East.

Police say the driver of the 2017 Ford Explorer fled the scene on foot. Two passengers in the vehicle remained at the scene and were detained.

Fuhs transported to the Daviess Community Hospital where he was treated and later released.

No names or other details have been released. The case remains under investigation.