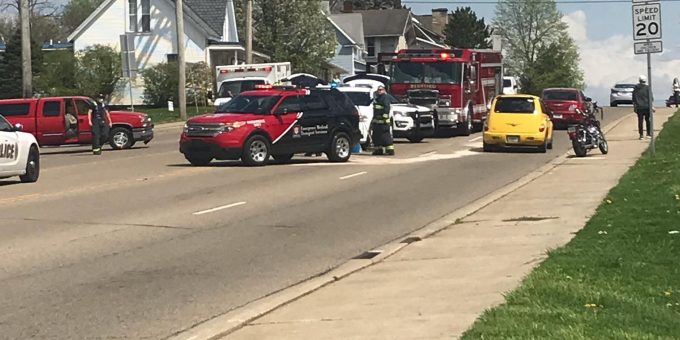 BEDFORD – A Clarksville man was injured after a motorcycle collided with a vehicle Friday afternoon at the intersection of 16th and R streets.

According to a Bedford Police report, 78-year-old Danny Dalton, of Bedford, was traveling south on R Street in a 2003 Chevrolet Silverado and stopped at a stop sign at the intersection. He attempted to turn left onto 16th Street.

At the same time, 29-year-old Wesley Epperson, of Clarksville, was “popping over a hill traveling westbound on 16th Street” on his 1987 Harley Davidson motorcycle.

Police say the two vehicles collided in the intersection.

Dalton told police he believed Epperson was traveling at a high-rate of speed because “it came out of nowhere”.

Police say Epperson was barely conscious and could not tell officers what happened. Epperson suffered severe head injures and possible internal injuries. He was transported by a Seals ambulance to IU Health Hospital for treatment. He was later flown by helicopter to Methodist Hospital in Indianapolis.

Dalton was not injured.

Both drivers submitted to blood tests which is standard procedure. Those results are pending.