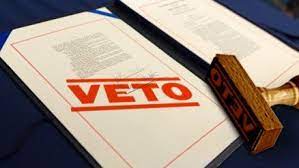 INDIANAPOLIS – Indiana Gov. Eric Holcomb Friday vetoed a bill that would have given legislators more authority to intervene during emergencies declared by the governor.

Holcomb issued the veto on the proposal that lawmakers approved over his objections, and which he and some legal experts have said they don’t believe is allowed under the state constitution.

Holcomb’s fellow Republicans pushed the bill after months of criticism from some conservatives over COVID-19 restrictions that he imposed by executive order during the statewide public health emergency over the past year.

“I firmly believe a central part of this bill is unconstitutional,” Holcomb wrote in his veto letter. “The legislation impermissibly attempts to give the General Assembly the ability to call itself into a special session, thereby usurping a power given exclusively to the governor.”

Lawmakers could vote to override Holcomb’s veto before the current legislative session ends in late April. Unlike Congress and most states, Indiana lawmakers can override a governor’s veto by a simple majority of both chambers.

The bill would establish a new process for the General Assembly to call itself into an emergency session when it isn’t meeting during its annual legislative session. The legality of that process, however, has been questioned since the state constitution gives the governor — not the Legislature — the authority for calling a special session.

The bill cleared the Legislature on Monday as House members voted 64-33 in favor, with four Republicans joining all Democrats voting against it. The Senate approved the bill in a 37-10 party-line vote.

Amid the legislative back-and-forth, Holcomb announced March 23 that he would lift the statewide mask mandate and remaining coronavirus business restrictions — a step that took effect the day after the bill’s passage.

Republican legislative leaders have praised Holcomb’s actions during the COVID-19 pandemic but say the bill is meant to allow the input of lawmakers during extended emergency situations.

The Legislature’s powers include authority to terminate emergency orders issued by the governor. Republican lawmakers have introduced such resolutions during this year’s session, but legislative leaders haven’t advanced them for any votes.

Republican House Speaker Todd Huston has said he was grateful for how Holcomb has handled the coronavirus pandemic, which health officials say has killed more than 13,000 people in the state.

Huston said he told Holcomb last spring and summer that he didn’t believe a special legislative session was needed but that future legislatures could believe they needed greater involvement during a long-lasting emergency.

Holcomb hasn’t said his office would file a lawsuit on the issue and it isn’t clear when that could happen.

Other provisions in the bill would give lawmakers more control over federal relief money that Indiana receives.

Other bills advancing in the Legislature would give city and county elected officials more oversight of orders issued by local health officers and limit restrictions from health orders that could be placed on religious services.