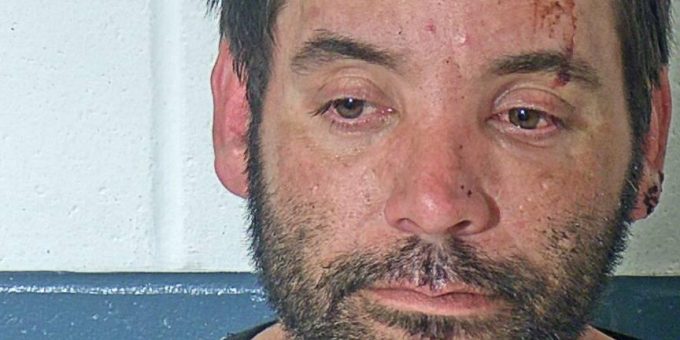 BEDFORD – An Oolitic man was arrested Monday after Bedford Police officers were called to the Quality Inn after a report of a domestic dispute.

When the officer arrived he was met by a man who told police a woman and her child were hiding from her soon-to-be ex-husband 41-year-old Jeremy Hutchens. He told police Hutchens had taken the woman’s vehicle, returned it and then flattened the tires.

The male took the officer to a window where they saw the woman outside with Hutchens and he was yelling at her.

The officer went outside and  confronted Hutchens, who then began yelling at the officer.

The officer then drew his taser and again told Hutchens to calm down.

The woman told police she had filed for divorce because Hutchens was abusive and violent. She also informed the police she filed a protective order, but it had not yet been served.

She reported Hutchenson took her car and returned it and then flattened the tires. She had gone outside to change the tire when Hutchens showed up and began screaming at her.

The hotel manager asked both the woman and Hutchens to leave the property.

Hutchens was asked to leave the hotel immediately. He refused and became angry saying he was going to take the plate’s off the woman’s vehicle. He was told again to leave and stop yelling, he refused.

Officers had to forcefully place Hutchens in handcuffs. He continued to be combative and resisted the officers. He was arrested on charges of disorderly conduct and trespassing.