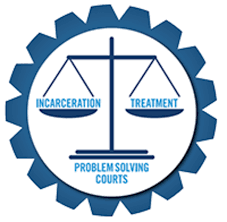 BEDFORD – Lawrence County is seeking a grant to establish a veterans problem-solving court.

Most veterans are strengthened by their military service, but the combat experience has unfortunately left a growing number of veterans with issues such as PTSD and physical injuries from combat service.

“Currently there are 26 veterans who served our country on probation, said Judge Cline. “Nineteen have felony charges and seven misdemeanor charges.”

They are from every branch of the military.

“We should be able to take care of these men and women instead of having them go to Monroe County or another county for service,” added Judge Cline. “They served our country and were honorably discharged, some injured while doing so. They are capable and we can help.”

According to Superior Court Judge Bob Cline, who is also a veteran, the veterans treatment court model requires regular court appearances, as well as mandatory attendance at treatment sessions, and frequent and random testing for drug and alcohol use.

Veterans respond favorably to this structured environment, given their past experiences in the Armed Forces. However, a few will struggle, and it is exactly those veterans who need a veterans treatment court program the most. Without this structure, these veterans will re-offend and remain in the criminal justice system.

“The veterans treatment court is able to ensure they meet their obligations to themselves, the court, and their community,” Judge Cline added.

Veterans treatment courts allow jurisdictions to serve a large segment of the justice-involved veteran population as opposed to business as usual: having all veterans appear before random judges who may or may not have an understanding of their unique experiences and issues. Because a veterans treatment court judge handles numerous veterans’ cases and is supported by a strong, interdisciplinary team, he or she is in a much better position to exercise discretion and effectively respond than a judge who only occasionally hears a case involving a veteran defendant.

Veterans treatment courts are tapping into the unique aspects of military and veteran culture and using them to the benefit of the veteran.

“Through these specialty courts, those who served in our nation’s Armed Forces are allowed to participate in the treatment court process with their fellow veterans, re-instilling the sense of camaraderie they felt while in the military,” said Judge Cline.

“I want to thank the commissioners for their understanding and support for these men and women,” said Bough. “These veterans deserve our support.”