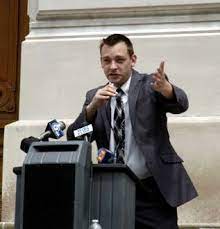 FISHER – On Saturday, the Libertarian Party of Indiana met in Fishers, and online to hold their annual convention where the members elected a new Chair and Vice-Chair.

More than 160 state party members, from all corners of the state, participated in the party’s first ever hybrid convention.

The in-person portion was held at the Forum Event Center in Fishers and maintained capacity limitations, social distancing, and safety protocols imposed by the Fishers health department. Delegates wishing to remain at home were allowed to participate remotely via Zoom.

Evan McMahon, of Indianapolis, was elected to replace Timothy Maguire who had served as the Chair of the Libertarian Party of Indiana for the past four years. Maguire had announced earlier in 2020 that he would not seek a third term.

McMahon had recently been serving as the state party’s Development Director tasked with growing the party membership and assisting with the creation and implantation of the party’s 10 Year Strategic Plan. McMahon had previously served as Executive Director of the Libertarian National Campaign Committee, at-large representative on the national party board, and as campaign manager for numerous campaigns including Rupert Boneham’s 2012 campaign for Governor of Indiana.

McMahon said that his focus will be on building party infrastructure, recruiting candidates, and supporting local county parties.

“In 2022 we will have at least 138 Libertarian candidates on the ballot. That’s every State Rep, State Senate, Congressional, and statewide office seat. Not even halfway through 2021 and we already have over 100 of those seats recruited and gearing up.”

Lucy Brenton, of Hardinsburg, was elected to replace Erin Pyle who had served as the Vice-Chair of the state party for the past two years. Pyle had announced earlier in 2020 that she would not seek a second term as she was relocating out of state.

Brenton is well known as the party’s 2016 and 2018 candidate for U.S. Senator. Brenton has been involved with the party since the early 90’s.

After Donald Rainwater, 2020 Libertarian candidate for Governor, in a contentious three-way race earned 11.4% of the statewide vote and came in 2nd place in 32 counties the party saw an opportunity to change the face of politics and public policy in Indiana. The membership elected the officers it felt would best capitalize on the opportunity.