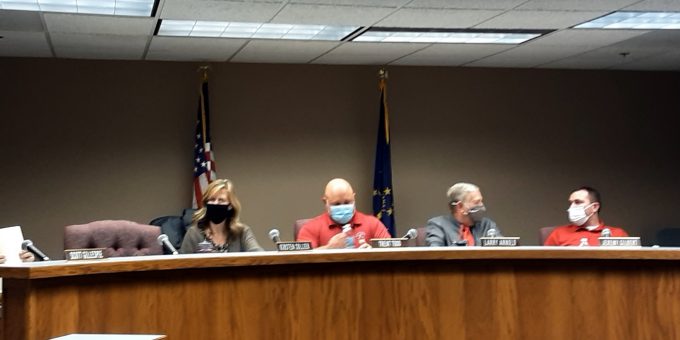 ” I have served on boards before, never on a school board. But, I know we get many of the same phone calls. I know it so much easier to be that board member out there, and they have an idea. You get opinions from both sides, both sides are logical, both sides passionate about and it deals with the community. I enjoyed working with you all, and sometimes we disagreed and agreed to disagree. I just hope that you did not feel there was any disrespect for your position. We thank you for serving,” said Dr. Ty Mungle about the three outgoing board members.

The North Lawrence Career Center has seen those improvements with over $1 Million dollars in new equipment to train students in careers of trades.

“For fourteen years it has been a privilege to serve on this board. I have been blessed to work with a lot of different people. I want to thank Joe Timbrook and his group for the outstanding work that they have done at the career center. I believe we have one of the finest career centers in the state. This is what motivated me to get back on the school board, and I am not disappointed that I didn’t. We have one of the best directors in the state, Mr. Brad Street. That career center is the future of our community,” said Arnold.

Jeremey Gilbert has served four years on the North Lawrence Community School board.

” I just want to thank all the staff, teachers, janitors, administrators, you are a fine group of people. I look at the administrator list of a couple of dozen and in the last three years, we hired 18-20 of those. I believe we have done a decent job. I know we met a lot of headwinds in the last three years but we have taken up the challenge. I think we have done some good things and hopefully, we are able to build upon them,” said Gilbert in his closing remarks.

Scott Gillespie has served a total of 16 years on the North Lawrence Community School board.

“Back in 2003, I was working closely with the schools and I was inspired by Dr. Dennis Turner who talked a lot about the victory in the classroom and that is what drove me to want to serve. I had a front-row seat to a lot of things, it has been an honor to serve,” said Scott Gillespie in his statement about being a school board member.

North Lawrence Community School board members thanked all the board members for their dedication and considered it an honor to work with them all.