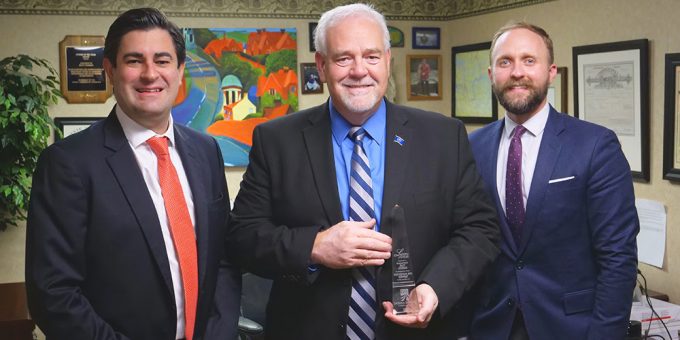 The Legislator of the Year award recognizes Lehman for his support of a strong business and banking environment. A notable example was his work in the 2020 session on HEA 1109, which resolved issues involving soliciting business via telephone contact and the furnishing of credit reports.

Lehman was elected to the Indiana General Assembly in 2008, representing House District 79, and currently serves as House majority leader. He is a member of the House Financial Institutions and Insurance Committee, the House Public Health Committee and the House Public Policy Committee. Lehman began public service in 1994 when elected to the Adams County Council, for which he served as president from 2000 to 2008.

“From starting a business to buying a home and heading off to college, we often interact with financial institutions as we take big steps in our lives,” Lehman said. “With so much at stake, it’s key to ensure our state policies do not hinder the banking industry’s ability to continue meeting the various needs of Hoosier customers.”

A certified insurance counselor, Lehman is a member of the Independent Insurance Agents of Indiana and the Independent Insurance and Brokers of America. He began his insurance career with Bixler Insurance Inc. in Berne in 1991 and in 1994 became a partner. Previously Lehman was a sales representative with Moser Ford in Berne. He has been active in the community through organizations including Rotary International, the Berne Chamber of Commerce and Junior Achievement. Additionally, he serves on the Swiss Village board of directors. Lehman is an aviation technology graduate of Vincennes University.

Dax Denton, IBA senior vice president of government relations, said: “Rep. Matt Lehman is a natural choice for IBA Legislator of the Year. As a member of the business community, he understands the complex fiscal issues that can impact the banking industry and the overall fiscal strength of Indiana. We appreciate his hard work and dedication to a healthy economy.”