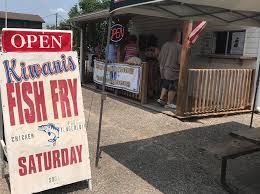 (OOLITIC) – The December Fish Fry from the Oolitic Kiwanis Club has been canceled. Due to the increasing amount of COVID-19 cases in Lawrence County, the group made the decision to cancel the event to protect the volunteers and patrons.

The January fish fry is tentatively scheduled for January 2, 2021, and the group will reevaluate as time gets closer to the event.

“We want to thank everyone for the continued support of the club. This year has been a challenge for everyone but with your help, we will have many successful fish fry’s,” said Leah Gross of Oolitic Kiwanis.

The Oolitic Kiwanis continues to grow with the addition of new members. One of the newest members, Atalie Klummp, has been announced as president for the group.

Atalie is one of the youngest and most active members and is always eager to lend a hand with many of the club’s service projects.

The club is proud to have younger indivduals take part in the organization.

Kiwanis International is a global community of clubs, members, and partners dedicated to improving the lives of children one community at a time. Today, we stand with more than 550,000 members from K-Kids to Key Club to Kiwanis and many ages in between in 80 countries and geographic areas. Each community has different needs, and Kiwanis empowers members to pursue creative ways to serve the needs of children, such as fighting hunger, improving literacy and offering guidance.

If anyone is interested in becoming a new member or has other questions regarding the group you can contact any member to learn more about the organization and many projects the group takes part in.

The officers for the group are: