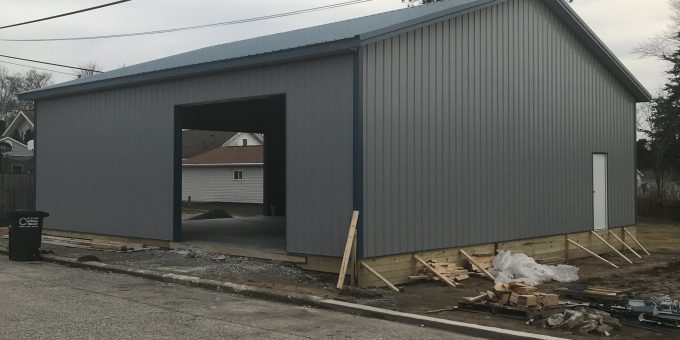 (BEDFORD) – On Tuesday, The Bedford Board of Zoning Appeals approved a variance for Bryan White who already constructed a new garage. The approval came following a second vote that could have been a costly mistake for the property owner.

Bryan White requested a variance for lesser than a required set back on his property located at 2106 Park Avenue. The property is zoned as R-2 Low-Density Residential and the minimum setback is 25 feet because his property sits on a corner lot.

The board of zoning appeals approved a 18 foot variance for the building.

One person filed a complaint about the construction of the garage fearing that White would be using the garage as a business. The person who filed the complaint did not attend the meeting. Another person wrote in support of the project and one person refused a letter from the city requesting comments.

The Bedford Board of Zoning Appeals originally voted 2-2 on the motion. Board Member Bill McFadden was not in attendance so the decision would have to wait until the next meeting.

However, after continual discussion, Doug Kellams made a motion to accept the variance and all four members ended up approving the variance.

Following the meeting Brandon Woodward explained how property owners could prevent such a costly mistake.

“Whenever a person files for a building permit, there are rules that the property owner would need to follow. Whenever the property owner files for the permit, it is reviewed, they are offered the setback, and the planning office would visit the location,” said Woodward.

In this case, the city was not aware of the project until a neighbor called in and complained about the building. This then stopped the construction until the hearing on Monday.

White has put $30,000 in this building as a retirement project.

“Any time you do a project, the best thing a person can do is attach a site plan with your application,” said Woodward.

The contractor should also file the building permit. This makes sure all of the requirements are kept.