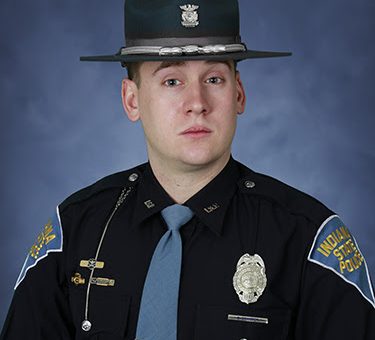 Prior to joining the Indiana State Police (ISP), Trooper Zehnder was a 2005 graduate of New Albany High-School and later attended Indiana University-Southeast.  Dustin joined the Indiana National Guard in 2005, where he currently holds the rank of First Sergeant and serves as the Headquarters Battery First Sergeant for the 1-163rd Field Artillery Battalion based in Evansville, Indiana.  Dustin also served a combat tour in Iraq in 2008.

Trooper Zehnder graduated from the 72nd ISP Recruit Academy in December of 2012 and was initially assigned to the Toll Road Post before transferring to Sellersburg in 2014.  Dustin was named Trooper of the District and also received the DUI Life Award in 2016.

Sergeant Zehnder will serve as one of five squad sergeants assigned to the Sellersburg Post and currently resides in Floyd County with his wife Ashley and son Hank.  Please join us in congratulating Sergeant Zehnder on his promotion.