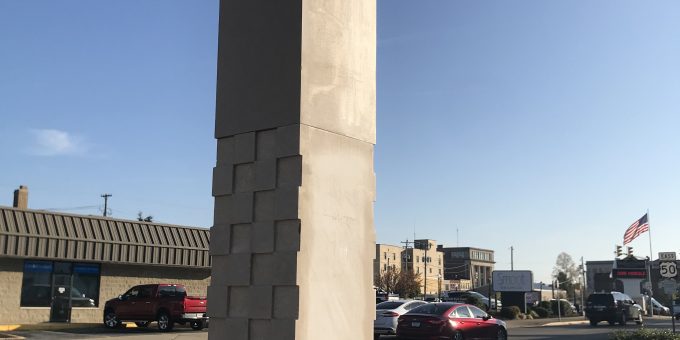 (BEDFORD) – The Gateways that were created during the Stellar Project are now being placed at two locations. One is in front of Bedford City Hall, and the second is at Crowder’s Pharmacy on east 16th Street.

When they are set in place the top portion will have the lettering of “Bedford” on it. Each of the pillars is 8 feet tall, two feet wide, weighing more than 8,300 pounds.

The project was under the previous administration of former mayor Shawna Girgis with Marla Jones helping with all aspects of the Stellar Project.

Brandon Woodward of the Bedford Planning Department was assigned by Bedford Mayor Sam Craig to make sure the project got completed.

Several businesses were instrumental in portions of the gateways. Architectural Stone Stone did the design of the stone, Johnny Signs did the lettering of the gateways, McIntyre Brothers brought the crane, and Chuck Jones Engineering designed a cage that was underground to help hold the stone in place.

The city would like to thank Crowders Drugstore owner Ralph Anderson for providing a location for the gateway on the eastside.

“This is a great accomplishment for our city,” said Bedford Planning Director Brandon Woodward.