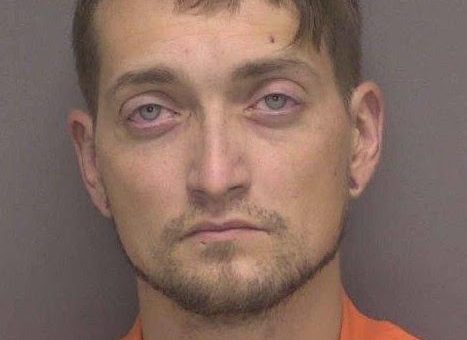 (DECATUR) – Shortly before 7:30 p.m. this past Wednesday, Indiana State Trooper Anthony Repass was conducting an interdiction patrol on US27 just north of Decatur, Adams County.  What initially appeared to be a routine traffic stop of a red KIA passenger car for a simple registration violation ended in the arrest and incarceration of the driver, 28-year-old Joshua Michael Wolf, of Fort Wayne, on multiple criminal charges.

During the initial course of the traffic stop, Trooper Repass quickly alerted to Wolf’s nervous behavior and impaired physical mannerisms, which led him to suspect criminal activity was afoot. As the traffic stop progressed, probable cause was established to search Wolf’s vehicle.  Backup officers from the Decatur Police Department arrived to assist Repass, and a thorough search of Wolf’s vehicle was then conducted.  This search resulted in the discovery of a large supply of drugs and drug related paraphernalia, to include baggies of suspected Methamphetamine, Heroine, Fentanyl, numerous prescription pills, several hypodermic syringes, and a “crack” pipe.  It was also discovered that Wolf had an active arrest warrant for Criminal Conversion through the Allen County Superior Court.

Wolf was placed under arrest and taken into custody without incident. He was transported to the Adams County jail, where he was booked into custody on multiple felony and misdemeanor charges.  He remains held pending an initial hearing on the matter.