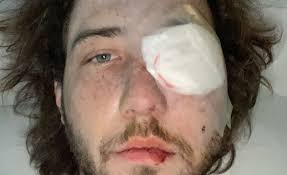 (FORT WAYNE) — A man who lost an eye after being struck by a tear gas canister police in Indiana fired during a May protest over George Floyd’s death is suing the city and a police officer.

21-year-old Balin Brake, of Fort Wayne, contends in a federal lawsuit filed Friday in U.S. District Court that the injury “has permanently changed his life” and led to mounting medical bills.

He is suing the city of Fort Wayne and the unidentified officer who fired the canister, alleging his constitutional rights were violated and that police used excessive force during protests in the city’s downtown, The Journal Gazette reported.

City spokesman John Perlich declined to comment on the pending litigation. It stems from a May 30 protest where hundreds of people gathered near the Allen County Courthouse to protest George Floyd’s death after a Minneapolis police officer pressed his knee on the handcuffed Black man’s neck for several minutes.

According to the complaint filed by the American Civil Liberties Union of Indiana and a Chicago law firm, Brake was peacefully protesting when a Fort Wayne Police Department officer fired a tear gas canister that struck him in his right eye, rupturing it.

Doctors at a local hospital were forced to remove Brake’s eye, according to the suit, which seeks damages for Brake’s injuries, punitive damages against the officer and a judge’s order declaring that the city violated Brake’s First and Fourth Amendment rights.

“The right to protest is fundamental to our democracy and no one should face tear gassing and injury while exercising that right,” said Jane Henegar, executive director at the ACLU of Indiana.

Fort Wayne police said in a May 31 statement that a protester had stayed in the area following police commands for them to clear out. When tear gas was used that protester bent over to pick up a canister to throw back at police, according to the state from police spokeswoman Sofia Rosales-Scatena.

“When he bent over, another canister was deployed in the area and that canister skipped and hit the protester in the eye,” Rosales-Scatena wrote. “There was no deliberate deployment of gas to any person’s head.”

Brake has denied reaching for a canister to throw and said he didn’t hear warnings to leave.