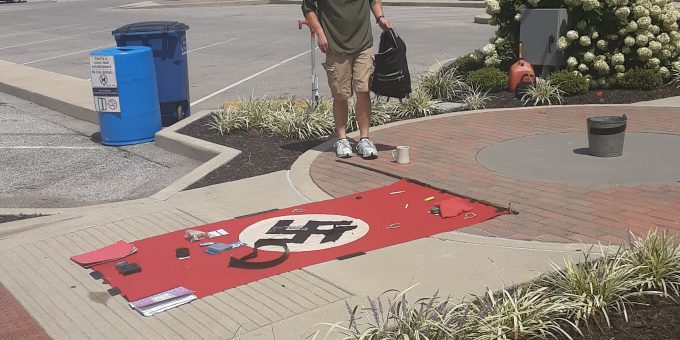 (BEDFORD) – Jared Spoonmore’s plan to burn a Nazi flag at the Lawrence County Courthouse on Sunday afternoon was stopped by Bedford Police officers.

Spoonmore made a social media post about burning a Nazi flag after he says he obtained permission from local officials.

Spoonmore showed up with a gas can, metal bucket as well as the flag around 2:00 p.m. and Bedford police officers arrived shortly after and asked him to leave.

Spoonmore invited people to show up to watch the flag burning, however, no one other than a person who brought him showed up.

“I wish you guys would get your stories straight,” Spoonmore said to the officers as he was packing up his gas can and materials he brought to burn.

There was no further incident as Spoonmore was leaving.

Both Spoonmore and the police were respectful to one another. Spoonmore asked officers why it was not allowed, saying he had studied criminal justice.

According to officials he was required to have a burn permit and burn pit in order to have a fire.