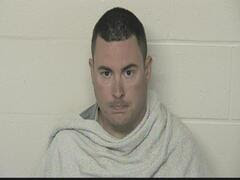 On Monday morning, Sheriff Brent Miller learned of possible sexual contact between a female inmate housed at the Washington County Jail and Jacob E. Silverthorn, who was employed as a corrections officer.

The contact was alleged to have happened a few days prior, while Silverthorn was working at the jail and responsible for overseeing inmates in the facility.  Sheriff Miller immediately contacted Indiana State Police Detective Travis Baker and requested an independent investigation into the allegations.  It was also alleged Silverthorn provided liquid nicotine to the inmate.

This case is still under investigation, and all information will be turned over to the Washington County Prosecutor upon completion.

Detective Baker was assisted by members of the Washington County Sheriff’s Department.