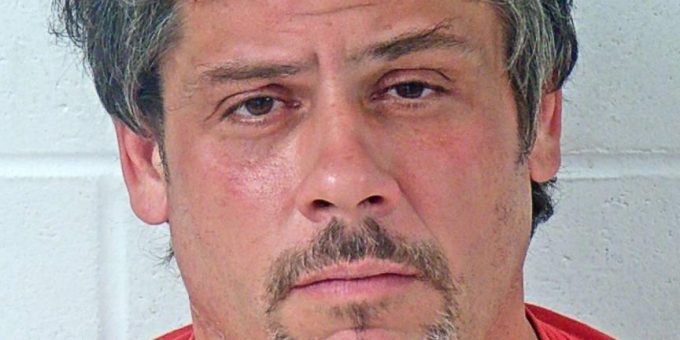 (BEDFORD) – A Springville man was arrested Tuesday night after he allegedly stole a vehicle.

According to a probable cause affidavit, Lawrence County Sheriff’s deputies arrested 48-year-old Kerby Silvers, of 44 Wells Lane, on a warrant on charges of auto theft and operating a vehicle without a license, habitual traffic violator.

On July 14th, Lawrence County Sheriff Department deputies were requested to the 820 block of Cobb Lane in Springville after a report of a theft.

When police arrived a property manager for the Armstrong property reported a 4-wheeler, power sprayer, weed wacker and other items had been stolen.

A door was open and a cell phone was found lying on the ground outside a house next to the building where the items were stolen.

Police learned the phone was owned by Kerby Silvers.

On July 14th at 1 p.m. deputies drove past Silvers’ home on Wells Lane to see if they could see the stolen property from the street.

While en route, the property manager called police saying he found the 4-wheeler parked in a yard on Wells Lane and someone was sitting on it.

Deputies continued to Wells Lane and when they arrived they knocked on the door of the home. A woman answered the door and said Silvers was at a neighbor’s house.

Deputies walked to the neighbor’s home directly next to the home and knocked on the door.

A male told police Silvers was out back in the garage with someone.

The three deputies walked to the garage and Silvers was not there.

As they walked back to their patrols cars they heard what sounded like a 4-wheeler. Police saw Silvers driving the 4-wheeler northbound on Spencer Pike Road and then turn right onto Wells Lane traveling toward deputies.

Silvers pulled in the driveway and was asked to get off the 4-wheeler. Police were able to determine the 4-wheeler was the stolen one from the Armstrong Farm.

Silvers was then read his Miranda rights.

Silvers told police that Robert Thomas had received a severance package from his previous employer (the victim) when he quit his job on the farm. Kerby stated Thomas told him that he was given property instead of money as part of his severance package, and he did not have anywhere to store the items and asked Kerby if he could store some of the items. Kerby agreed but stated that he did not know the items were stolen.

Police found the ignition in the 4-wheeler had been damage so it could be started without a key.

Deputies also found the Stihl weed wacker, a Dewalt grease gun and a chainsaw inside the house which were identified by the victim as items belonging to him.

All of the property was returned to the victim.

Police then secured a search warrant for the phone found at the scene of the theft.

On the phone, investigators found several text messages trying to sell the 4-wheeler.

Officers sent their information to the Lawrence County Prosecutor’s Office for a warrant for Silvers’ arrest.