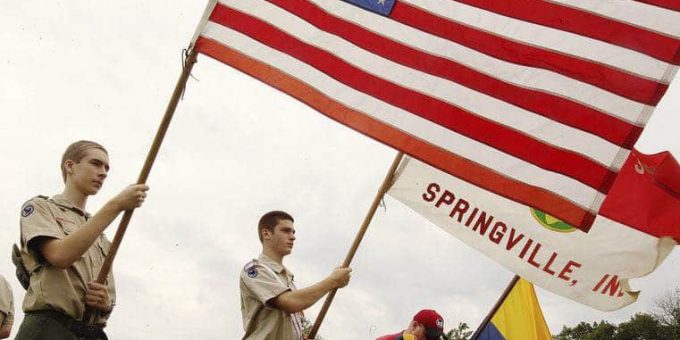 (SPRINGVILLE) – For more than 66 years Boy Scout Troop 343 in Springville has been mentoring and teaching life skills to boys.

This particular Pack has been active since 2009, providing family adventures while teaching skills and having fun.

Now girls are allowed to join in on the fun.

“The girls get to do the same things the boys get to do, they camp, they cook, we teach them knots,” said Nicole Rogers, Cub Master for the Springville Cub Scouts.

“The Cub Scouts camp stay in tents, teach dutch oven cooking, knot tying, and the Webelos just got through building a bridge. We do our best to teach them the twelve points of the law, be respectful, and to be functioning adults of society,” said Rogers.

During the Eagle Scout ceremony one Scout at a time will light a white candle and say one principle of the law.

A Scout is Trustworthy. A Scout tells the truth. He is honest, and he keeps his promises. People can depend on him.

A Scout is Loyal. A Scout is true to his family, friends, Scout leaders, school, and nation.

A Scout is Helpful. A Scout cares about other people. He willingly volunteers to help others without expecting payment or reward.

A Scout is Friendly. A Scout is a friend to all. He is a brother to other Scouts. He offers his friendship to people of all races and nations, and respects them even if their beliefs and customs are different from his own.

A Scout is Courteous. A Scout is polite to everyone regardless of age or position. He knows that using good manners makes it easier for people to get along.

A Scout is Kind. A Scout knows there is strength in being gentle. He treats others as he wants to be treated. Without good reason, he does not harm or kill any living thing.

A Scout is Obedient. A Scout follows the rules of his family, school, and troop. He obeys the laws of his community and country. If he thinks these rules and laws are unfair, he tries to have them changed in an orderly manner rather than disobeying them.

A Scout is Cheerful. A Scout looks for the bright side of life. He cheerfully does tasks that come his way. He tries to make others happy.

A Scout is Thrifty. A Scout works to pay his own way and to help others. He saves for the future. He protects and conserves natural resources. He carefully uses time and property.

A Scout is Brave. A Scout can face danger although he is afraid. He has the courage to stand for what he thinks is right even if others laugh at him or threaten him.

A Scout is Clean. A Scout keeps his body and mind fit and clean. He chooses the company of those who live by high standards. He helps keep his home and community clean.

A Scout is Reverent. A Scout is reverent toward God. He is faithful in his religious duties. He respects the beliefs of others.

“Since the COVID-19 pandemic, the Boy Scouts and Cub Scouts have not been able to have any meetings. The group has a Facebook page to keep the kids active and keep them involved,” said Brian Grissom who is a Den Leader.

“We teach them knots, and other activities and have them post pictures and things on our Facebook page,” Grissom added. “I have been involved with scouts for ten years, my son came home with a flyer saying ‘I wanted to do this’.”

“My son joined and a couple of years later I became a den leader, and then on to Cub Master. My son is currently working on his Eagle Scout,” continued Grissom. “Scouts is always a family-oriented business that gets mothers, fathers, grandparents, aunts, and uncles; anyone in their family involved.”

The Adventure Crew is for boys and girls age 14 and over, they do more adventurous activities like rock climbing, kayaking, canoeing, and trips to one of the National Scout camps.

The are four National Scout Camps in America.

You can find a pack by visiting BeAScout.org.