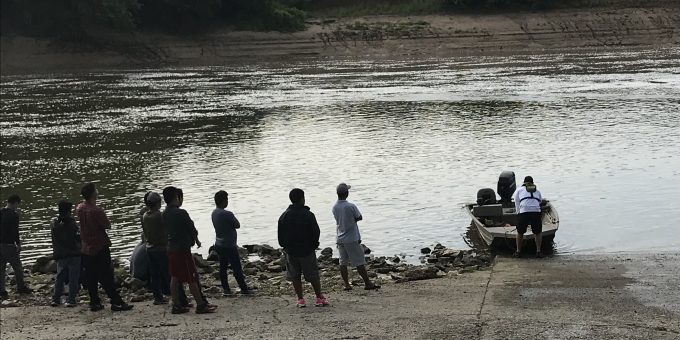 (WILLIAMS) – Indiana Conservation Officers resumed their search for two men who were swept away by the current in the East Fork of White River just below the Williams Dam, Tuesday morning.

Searchers are utilizing various sonar units, divers and boats to search the area where the men were last seen.

Rescue crews were alerted after witnesses say the two men, who have not been identified, were wading in the river to get to a rock island to fish.

According to DNR Public Information Officer Jim Hash, the men were wading to the island when they swept under by the current 75 to 100 yards downstream and did not resurface.

The Lawrence County Police Department along with the Indian Creek Fire Department are assisting Indiana conservation officers in the search, this morning.

Extended family members of the men stayed on the scene throughout the night and were at the Williams boat ramp this morning watching searchers attempting to locate the men.

The White River Bait and Tackle offered their facility overnight to the family members, to stay in out of the thunderstorm last night.

There has been an increase in fishing at the Williams Dam this year, with many coming from Indianapolis.