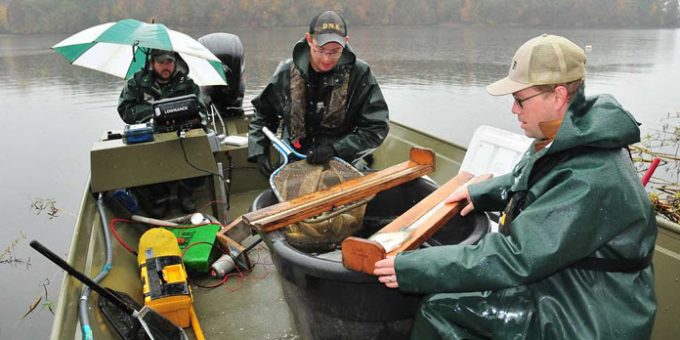 To collect fish, biologists use a variety of methods, depending on survey objectives. Fish surveys are conducted from when ice is gone in March, through November.

By using multiple methods to catch fish, biologists can obtain a snapshot of the entire fish community. The most common survey type in May and June uses three methods.

The first collects the majority of near-shore fish with electrofishing during which fish are temporarily stunned and netted by using a measured electrical current in the water.

For the second, biologists use trap nets extending from the shore to a basket. Nets are set perpendicular to the shore, collecting fish moving overnight nearby. Trap nets often collect more and larger panfish than electrofishing does.

The third method uses gill nets, which are set off shore, often near drop-offs. These nets entangle fish that typically do not come close to shore such as shad, suckers, and bullheads. All fish are placed in a livewell, where they are sorted, counted and measured before being released back into the water.

Survey reports are available for different lakes on the Where to Fish map or you can contact your district fisheries biologist for more information.