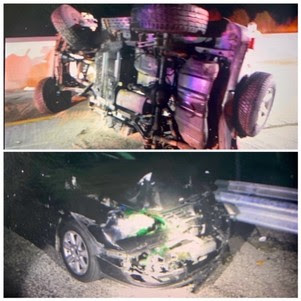 (CLARK CO.) – On Thursday, March 5th, Indiana State Police in Sellersburg arrested a Charlestown man for operating a vehicle while intoxicated (OWI) and other charges after Troopers say he collided with another vehicle and then left the scene.

Just before 10 p.m. Thursday, police were alerted to a roll-over crash involving a Jeep Wrangler on I-65 Northbound near the 12 mile-marker. When officers arrived at the crash, they located Todd Chandler of Scottsburg trapped in his vehicle. Chandler sustained severe but non-life threatening injuries and was transported by ambulance to University Hospital in Louisville.

A short time later, officers were alerted to a second vehicle stopped approximately one-half mile north of the crash. The car, a black 2006 Volkswagen Passat, registered to 37-year-old Jeffery A. Briscoe III, of Charlestown, was abandoned with its flashers on and appeared to have recently been in a collision. The damage was consistent with the damage caused to the Jeep Wrangler at the original crash scene.

Around 10:48 p.m., A caller reported a person running northbound on I-65 near the 15 mile-marker. A Clark County Deputy responded and located Briscoe running north along the interstate. Trooper Morgenn Evans then responded to investigate. During the investigation, Briscoe refused all chemical and field sobriety testing offered.

Anyone who has information or who witnessed the crash is encouraged to contact Trooper Rob Caudill at the Indiana State Police Post in Sellersburg by calling 812-246-5424.

The Indiana State Police were assisted by officers from the Sellersburg Police Department, The Clark County Sheriff’s Department, and the Tri-Township Fire Department.