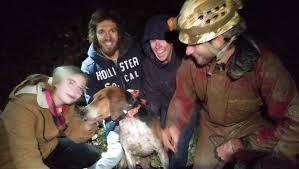 (CAMPBELLSBURG) — A champion hunting dog that followed a raccoon into a Campbellsburg cave and got stuck was rescued after spelunkers squeezed through the cave’s cramped entrance and found the dog on an underground ledge.

BuzzMan, a 5-year-old coon hound, was pursuing a raccoon Saturday during a sanctioned hunt sponsored by the Campbellsburg Coon Hunters Club when he went missing in the Washington County cave. The signal from his GPS collar stopped at the cave’s entrance.

Ray and the dog’s owner contacted an Indiana conservation officer, who in turn contacted two spelunkers who volunteered to look for the dog in the cave. They crawled inside its narrow entrance for some distance but didn’t find BuzzMan and retreated early Sunday, hoping earth and debris they’d pushed aside would allow the dog to get out.

When BuzzMan still hadn’t emerged by Sunday afternoon, two slimmer volunteers entered the cave, followed by others who eventually found BuzzMan about 600 feet (182 meters) inside on a ledge in the cave’s complete darkness.

One of those rescuers strapped an extra light onto BuzzMan and the dog quickly made his way out of the cave, hungry and tired, but unscathed.

Ray said BuzzMan is a Professional Kennel Club Gold Champion and the dog has won more than $11,000 in competitions.